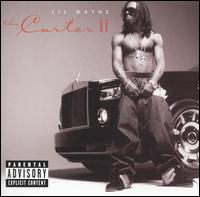 An appropriately titled album, Tha Carter II builds on the Lil Wayne of the first Carter, the Lil Wayne who was not only cocky, but also truly confident, confident enough to loosen up his rhymes and create a winning mixture of slick baller posturing and slippery flippancy. If the first Carter found him somewhere between a crazed Silkk the Shocker and a thuggish Devin the Dude, the excellent follow-up finds him more toward the latter. Take "Money on My Mind," a track that covers the usual "get money" territory but this time with scatological whimsy and off-the-wall rhymes that would make Tracy Morgan proud. This uninhibited style is also the reason the many hookless, freestyle-ish tracks work, and while these hardcore, mixtape-sounding numbers may alienate those who don't appreciate dirty street music, they balance the slicker club singles. Recalling the gutter hits of the Hot Boys -- the crew where Lil Wayne spent his teen years -- the stomping "Fireman" was rightfully lighting up the request lines at the album's release, but the rest of the radio-worthy polish -- "Grown Man," "Hustler Music," and "Get Over" -- is much more soulful, with smooth R&B in its heart rather than tacked-on to land it on the play list. For longtime fans of Lil Wayne or the Cash Money label, the absence of regular producer Mannie Fresh is worth noting, but the Heatmakerz along with Tmix & Batman offer plenty of brilliant grime and glitter while two newcomers deliver the curveballs. Producer Yonny loops a reggae bounce and makes the smoking song "Mo Fire" drip out of the speakers like the dankest sticky-icky while Thicke -- as in Alan Thicke's son -- reprises his slinkiest number from his overlooked 2003 album Beautiful World for "Shooter," arguably the most adventurous and stylish Lil Wayne song yet. Lyrical triumphs like the epic "Tha Mobb" and the pimp-hand-showing "Receipt" seal the deal, leaving only the short, ignorable skits and the black-on-red printing in the liner notes to complain about (the latter is hell on the eyeballs). The sturdy Carter II caps off a year when the man was appointed president of Cash Money by founders Birdman and Ronald "Slim" Williams, then watched his 17th Ward, New Orleans, neighborhood destroyed by hurricane Katrina -- something bitterly touched upon during "Feel Me"'s FEMA dis, but most likely too late for press time for most tracks. The well-rounded, risk-taking, but true-to-its-roots album suggests he can weather the highs and lows like a champion and that Birdman and Slim knew something everyone else didn't when they bet the farm on the formerly "raw talent," now "fully formed" Lil Wayne. ~ David Jeffries, Rovi