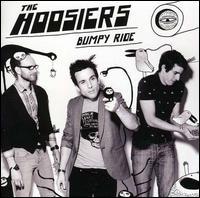 It's rare for a band as commercially aimed as the Hoosiers to implore their fans not to buy their most recent album, but that's exactly the predicament that the Anglo-Swedish trio found themselves in after being dumped by RCA following the disappointing sales of sophomore album The Illusion of Safety. Despite funding and supporting the album, which took two years to record, the label canceled its advertising campaign and pulled the plug on their relationship with the former chart-topping outfit after its lead single, "Choices," failed to make the Top Ten by just one agonizingly close position. Undeterred, the band who rode on the crest of the mid-noughties yacht rock wave, which also included the Feeling and Scouting for Girls, managed to obtain the LP's master tapes, and following Lady Gaga's lead, are now re-releasing it under a different title and with extra bonus tracks through their own imprint, Angelic Union, hence the aforementioned "don't buy that, buy this" plea. The original 12 songs from The Illusion of Safety remain intact, and although it veers into abstract indie rock territory toward the end, the first half offers the same stadium-sized pop choruses and multi-layered harmonies of their number one debut, The Trick to Life, albeit with an '80s electro tinge, and less forced attempts at quirky prog rock, making its lack of success slightly mystifying. Luckily, the band don't appear to have been panicked by their unfortunate record company wranglings, and the four extra tracks included here avoid the temptation of hastily reinventing their sound, and instead serve up another batch of glossy, Hi-NRG electro-pop songs which deserve to reverse their fortunes. "Used to Be Love" may be generic album filler, but elsewhere, lead singer Irwin Sparkes does his best Marc Almond impression on an addictive, new wave-inspired cover version of Soft Cell's "Say Hello, Wave Goodbye," previously only available as an iTunes bonus track, "Sister Sister" adds spiky indie guitar hooks to their newfound blend of spacy synths and retro beats, while the bubbling electro of post-punk closer "Squeeze" sounds like a lost Talking Heads classic. Loyal fans who supported them the first time around may feel aggrieved at having to fork out for just four new songs, but for anyone who was put off by their annoyingly contrived debut, Bumpy Ride is the ideal opportunity to hear just how improved the band has become. ~ Jon O'Brien, Rovi