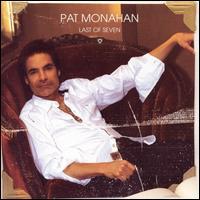 Pat Monahan alights from the Train, and embarks on a solo journey with Last of Seven, his debut solo album. Working closely with producer Patrick Leonard, who co-wrote and provides keyboards for the set, the album often tracks Train, but how could it not? The billowing "Two Ways to Say Goodbye," for example, was actually composed backstage at a Train show, while "Pirate on the Run" was originally intended for the band as well, and was co-written by Brandon Bush, but then Monahan shifted it into a male/female duet with phenomenal results. "Cowboys and Indians" is also a duet, this time with Graham Nash, an introspective number with a glittering chorus and haunting slide guitar. On "Cowboys," Monahan serves up peace for lunch, but that's one of the few exceptions to an album themed mostly around romantic entanglements. "I fell for you," the singer soulfully declares on the show-stopping "Ooh My My"; "I want you," he exuberantly insists on the funky "Ripple in the Water"; "I need you," he emotively beseeches on the power ballad "Great Escape," "I'm damn glad she's mine," he cheerfully exudes on the radio friendly "Her Eyes." But romance rarely runs a smooth course, and there's a clutch of more piquant numbers here as well, from the melancholy "Thinkin Bout You," across the billowing breakup of "Two Ways to Say Goodbye" and onto the hopeful yearning of "Someday." That latter number features a rousing gospel-ish chorus and Richie Sambora's exquisite guitar work. Luis Maldonado adds the Spanish tinges and bluesy licks to "Girlfriend," a song that describes Monahan and his wife's early relationship. The arena pleaser is "Raise Your Hands," a gospel styled number that will speak to all, pushing stadium crowds to their feet to sing along. But this is an album of many moods, its lyrics and yearning atmospheres deeply resonating, as Monahan delivers up some of his most emotive performances to date. A set that's intended to be long savored at one's leisure. ~ Jo-Ann Greene, Rovi