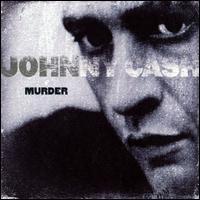 Of the three thematic Cash CDs simultaneously released in the spring of 2000 (the others are God and Love), Murder is the most sensible. For one thing, there are actually far fewer Cash songs about murder than there are Cash songs about love or God, so this compilation is a more thorough retrospective of a niche in his repertoire. In addition, one has to admit that Cash's somber vocals and flair for storytelling are well-suited for tales of assassination. Also, this is a well-selected set of 16 tunes, spanning the mid-'50s to the mid-'90s. With the exception of the classics "Folsom Prison Blues" (the original Sun version), "The Long Black Veil," and "Don't Take Your Guns to Town," most of these will be unfamiliar to many Cash fans, taken as they are from LPs, B-sides, and live recordings. Most of them are moving, sometimes chilling performances, whether Cash takes on the role of the killer or an observer. Cool overlooked cuts include 1965's spare and spooky "Hardin Wouldn't Run," and "When It's Springtime in Alaska (It's Forty Below)," recorded with wife June Carter. Some of these are pretty oddball tunes, too, in the best sense of that adjective. "Mister Garfield" is a gung-ho tribute to the most obscure assassinated American president, and "Joe Bean" actually manages some wicked gallows (literally) humor, its concluding punch line the message from the governor from whom Bean is hoping to obtain pardon: a gaily sung "Happy birthday, Joe Bean." One track, a 1966 cover of Harlan Howard's "The Sound of Laughter," was previously unreleased in the U.S., although it doesn't rate as one of the more notable entries on the anthology. Murder is also available as part of the three-CD box set Love God Murder, comprised of thematic discs that are available together or separately. ~ Richie Unterberger, Rovi