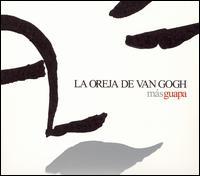 Like its predecessor, the multi-platinum Lo Que Te Conté Mientras Te Hacías la Dormida (2003), Guapa is a stunning showcase of La Oreja de Van Gogh's talent for crafting an array of nearly perfect pop/rock songs that are memorable and instantly appealing yet also intelligent and unique from one another. While many contemporary pop/rock albums feature a few highlights and a bunch of filler, La Oreja de Van Gogh albums are exceptionally high quality from beginning to end, with any particular song catchy and well-crafted enough to be a potential hit single. For instance, last go round Lo Que Te Conté Mientras Te Hacías la Dormida spawned eight chart hits -- over half the album -- and like its predecessor, Guapa offers a bounty of gems. The dynamic lead single, "Muñeca de Trapo," is the best of them, featuring a chorus powered by a surging guitar riff. The two highlights that follow, "Dulce Locura" and "Perdida," are also explosive. While the quiet-loud-quiet dynamics of these songs aren't as prevalent elsewhere on Guapa, every song boasts a memorable hook, and there's often a palpable tension between guitarist Pablo Benegas, whose riffs tend to overtake the songs during the choruses, and lead vocalist Amaia Montero, whose singing grows intenser whenever the guitar riffs kick in. All of this makes for dramatic and frequently powerful pop/rock -- that is, pop songs that at times truly rock. Toward the latter half of Guapa, after all of the aforementioned highlights have passed, there is a bunch of lighter songs ("Irreversible," "V.O.S.," "Apareces Tú," "Mi Vida sin Ti," "Cuantos Cuentos Cuento"), which helps relieve some of the earlier tension and closes the album on a fairly relaxed note. [Guapa was subsequently repackaged and re-released as Más Guapa, a two-disc edition that includes the original album on one disc and a compilation of previously unreleased material on the second disc. Some of the previously unreleased material is from the Guapa sessions, including a couple demos. Highlights include "En Mi Lado del Sofá" and "Nuestro Mundo," both of which are first-rate songs.] ~ Jason Birchmeier, Rovi