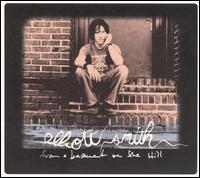 From a Basement on the Hill

Almost exactly a year after his untimely death -- missing the anniversary by just two days -- Elliott Smith's final recordings were released as the From a Basement on the Hill album. Smith had been working on the album for a long time. His last album, Figure 8, had appeared in 2000, and when it came time to record its follow-up, he parted ways with both his major label, Dreamworks, and his longtime producer/engineer, Rob Schnapf, working through a number of different producers, including L.A. superproducer Jon Brion, before recording a number of sessions with David McConnell, which were supplemented with Smith's home recordings. At the time of his death, Smith was still tinkering with the album. There was no final track sequence and only a handful of final mixes; it was closer to completion than Jeff Buckley's Sketches for My Sweetheart the Drunk, which he intended to re-record, but it was still up to his family to finalize the record. For various reasons, the family chose to work with Schnapf and Joanna Bolme -- a former girlfriend of Smith and current member of Stephen Malkmus' Jicks -- instead of McConnell, who went on record with Kimberly Chun of The San Francisco Bay Area Guardian the week before the release of From a Basement to state that this album was not exactly what Smith intended it to be. According to McConnell, as well as Elliott Smith biographer Benjamin Nugent, Smith wanted the album to be rough and ragged, and McConnell told Chun that "obviously Elliott did not get his wishes," claiming that three of the songs on the album were considered finished by both him and Smith, but appear on the record in different mixes.

It's hard to dispute that Smith did not get to finalize the mixes, the track selection, or the sequencing -- he died, after all, with the album uncompleted -- but that's the nature of posthumous recordings: they're never quite what might have appeared had the artist lived. Critics, fans, and historians can have endless debates about whether this particular incarnation of the songs on From a Basement on the Hill would have been what would have been heard if Smith had finished the record, but that doesn't take away from the simple fact that the music here is strong enough to warrant a release, and that it offers a sense of resolution to his discography. While it's likely that From a Basement is cleaner than what Smith and McConnell intended, it is much sparer than Figure 8, and it feels at once more adventurous, confident, and warmer than its predecessor. Perhaps it's not "the next White Album," which is what McConnell claims it could have been, but it has a similarly freewheeling spirit, bouncing from sweet pop to fingerpicked acoustic guitars to fuzzy neo-psychedelic washes of sound. It's not far removed from Smith's previous work, but it feels like a step forward from the fussy Figure 8 and more intimate than XO. The most surprising twist is that despite the occasional lyrics that seem to telegraph his death (particularly on "A Fond Farewell"), it's not a crushingly heavy album. Like the best of his music, From a Basement on the Hill is comforting in its sadness; it's empathetic, not alienating. Given Smith's tragic fate, it also sadly seems like a summation of his work. All of his trademarks are here -- his soft, sad voice, a fixation on '60s pop, a warm sense of melancholy -- delivered in a strong set of songs that stands among his best. It may or may not be exactly what Elliott Smith intended these recording sessions to be, but as it stands, From a Basement on the Hill is a fond farewell to a singer/songwriter who many indie rockers of the '90s considered a friend. ~ Stephen Thomas Erlewine, Rovi