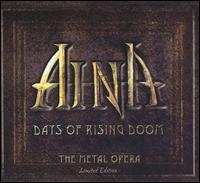 Sooner or later, it had to happen. Some group of heavy metal enthusiasts was bound to undertake the creation of a full-blown metal opera like Days of Rising Doom: The Metal Opera. Of course this being heavy metal -- a genre that takes itself far more seriously than other strains of popular music -- said group of musicians has sought to transcend the plane of small-time symphonic orchestrations and obliterate the accepted limits of mere concept albums in one fell swoop. Thus was born the Aina project, which was commissioned by Holland's Transmission Records (an acknowledged stronghold of operatic metal), and is predominantly the work (or folly, depending on your viewpoint) of producer Sascha Paeth and multi-instrumentalist Robert Hunecke-Rizzo. Alongside keyboardist and arranger Miro and all-around goth-diva vocalist Amanda Somerville, theirs is a massive operation featuring an immense cast of hard rock and metal musicians performing bit parts. (The list goes on and on, but among the major luminaries are ex-Angra singer Andre Matos, one-time Helloween frontman Michael Kiske, Blackmore's Night siren Candice Night, former Dream Theater keyboardist Derek Sherinian, Canadian glam rock chick Sass Jordan, and even Deep Purple legend Glenn Hughes.) And has the classical chamber septet on call, or the requisite boys' choir been mentioned? Like you didn't see that coming! Anyway, this small army has come together to flesh out the fantastical realm of Aina: a realm inhabited by great kings, evil princes, beautiful princesses, and symphonic power metal grandeur. Naturally, The Lord of the Rings is a major source of inspiration (right down to the invention of a rudimentary language), and melodic Euro-metal a dominating musical signature throughout; but even for cynics who prefer their metal without such Dungeons and Dragons or post-Helloween shenanigans, Days of Rising Doom is a remarkable achievement. What's more, Aina's 68 minutes and 15 tracks (highlights being the "Aina Overture," "The Beast Within," "Serendipity," and "Oriana's Wrath") are augmented by a second disc collecting assorted demos, alternate versions, single edits, and, more impressively, two versions of the 15-minute "The Story of Aina" (one instrumental, another overlaid with fairy tale-derived narration by Sebastian Thomson) book-ending it all. Just how these lengthy orchestral pieces are meant to co-exist with the music on disc one is unclear (separate companion pieces, one would assume), but they could almost stand on their own. Still not convinced? Then check out disc three: a DVD featuring a music video, a behind-the-scenes "making-of" documentary, moving storyboard, slide show, and custom artwork -- not too shabby! Simply put, until further notice (and of course there's a "to be continued..." tag here -- there's no telling how far these people will go!),Days of Rising Doom: The Metal Opera surely represents the apogee of the symphonic/operatic metal sub-genre. [Note: [The deluxe packaging of Days of Rising Doom: The Metal Opera does great justice to its contents by consisting of a hardcover booklet stuffed with 72 pages of notes about both story and participants.] ~ Eduardo Rivadavia, Rovi