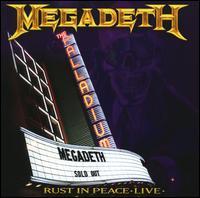 Although the 1990s may be thought of by many as the decade that thrash metal took a back seat to other hard rocking styles (grunge, nu metal, the oh-so-pleasant rap-metal, etc.), early in the decade all of thrash's founding fathers -- Metallica, Megadeth, Slayer, and Anthrax -- issued classic albums. Megadeth's contribution to the cause was a fierce, highly technical metal release titled Rust in Peace. The album signaled the debut of a new Megadeth lineup (newcomers Marty Friedman and Nick Menza joined original members Dave Mustaine and Dave Ellefson), and was also the first album the band did that featured both Mustaine and Ellefson embracing a "cleaner" lifestyle. Over the years, the album has certainly aged well, especially circa the early 21st century, when countless up-and-coming metal bands adopted a similar tech-heavy approach traceable directly back to Rust in Peace. So by 2010, with all sorts of veteran rock bands performing shows that included complete readings of a specific classic album from their discography, Megadeth felt the time was right to dust off Rust in Peace once more for the masses. For fans hoping that the Rust in Peace-era lineup would reunite for the tour, no dice. Mustaine has been Megadeth's sole permanent member over the years, but Ellefson (who left Megadeth in 2002) rejoined the band just before the tour, and Chris Broderick and Shawn Drover now occupy Friedman and Menza's former posts. Still, "Megadeth 2010" have no problem replicating the album note for note, as evidenced throughout Rust in Peace Live. Recorded at the Palladium in Los Angeles, you get the whole enchilada here, including such all-time metal classics as "Holy Wars...The Punishment Due" and "Hangar 18," as well as several non-Rust in Peace tunes, including "In My Darkest Hour," "Symphony of Destruction," and of course, "Peace Sells." But the problem lies in the fact that for the most part, the song structures replicate the studio versions very closely, which results in a live album not exactly full of surprises. ~ Greg Prato, Rovi