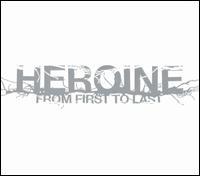 From First to Last

Whether 2006 stood to be the year that the post-hardcore (i.e., screamo) groups of the new millennium began really shedding their collectively formulaic skin for a more progressive and inventive overcoat still stood to be determined at the release of From First to Last's sophomore effort; after all, it was still only March. However, Heroine -- along with earlier releases from Hawthorne Heights and Matchbook Romance -- suggested that 2006 would find more bands choosing to push the envelope rather than simply rehash their back catalogs. In the two years since their debut full-length, a noticeable maturation has overtaken From First to Last, as Heroine not only reveals distinctly stronger and more confident vocals, but also finds the band placing a greater emphasis on more intricate song arrangements. Gone is the immaturity apparent in some of their past work, both lyrically and sonically (this isn't meant as a slight against the band; after all, most of the guys were in their early twenties and vocalist Sonny Moore was still in his mid-teens for their previous album). Heroine, though, is a dark, somewhat unpredictable album that is reminiscent at times of both the Used and At the Drive-In, but still remains wholly From First to Last. And rather than completely abandon the groundwork laid on Dear Diary, My Teen Angst Has a Bodycount, it's nice to see that From First to Last were able instead to use it as the foundation of their growth, exploration, and expansion. Producer Ross Robinson was able to draw out the band's actual heavy side (not just harsh, emotional screams and breakdowns) as heard in Matt Good and Travis Richter's relentless guitar work and Derek Bloom's always impressive drumming coupled with passionate vocals that regularly border on pure distress. "Shame Shame" and "World War Me" are both spastic, metal-influenced blasts of emotion, with the latter owning a borderline playful chorus of "woahs." The subtle yet dynamic "The Crows Are Coming for Us" starts off with steady drum rolls that give way to soaring vocals; mid-song, the tempo slows and creepy background vocals transform into an eerie, chanting chorus. On the softer side, "Waves Goodbye" is the closest to a ballad that one can find on Heroine -- don't even try looking for the brooding, emotive heartbreak of Dear Diary's "Emily" -- though its delicate, atmospheric wandering is interrupted by unnecessary electronic distortion. Taking cues from this song, the second half of the album is a bit more experimental in nature, but thankfully, not so much that there is a glaring divide between both ends of the album. Where many bands simply embrace the tried and true formula of previous efforts -- maybe making songs faster or harder along the way -- From First to Last have instead looked past their own limitations and challenged themselves to make a more developed record. Their hard work paid off, as Heroine is a notable step in the right direction for the band. ~ Corey Apar, Rovi