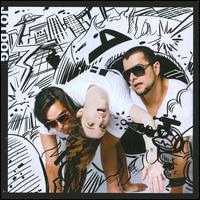 In a way, Jotdog are Mexico's answer to Garbage, an astutely designed pop concoction by a savvy multi-instrumentalist-producer and an alluring chanteuse, but with the alternative/punk edge being replaced with an obsession with '80s synth pop. Waifish singer María Barracuda and hit producer Jorge Chiquis Amaro had worked together in the past, but Jotdog represent a fresh stylistic start, highly seductive even if they're not particularly innovative. There is no lack of electro-pop Spanish acts beginning with Mecano -- arguably Jotdog's most obvious influence -- and Miranda!, whose recent success has rekindled interest in the genre and spawned imitators all over Latin America and Spain. Jotdog, however, decided not to mine the sexual ambiguity and postmodern irony that made Miranda! so appealing, and chose instead the very opposite as their winning card, namely the wide-eyed earnestness of Barracuda's coy voice and lyrics. When it works, their music is positively endearing, especially in the more soulful numbers such as the terrific smash single "Hasta Contar a Mil," the reggae-inflicted "El Beso," and the ballad of lost love "Piensa en Mí." On the other hand, the punchier, dance-oriented tracks that dominate the second half of the record, such as "Baila Sin Parar," are emotionally flat and thus hover dangerously close to being, well, lame. There is also an odd Spanish cover of Cyndi Lauper's "True Colors," not bad at all on its own, but it does make you wonder what it's doing here hidden behind all this perfectly realized nostalgia -- not to mention the unintentional irony of looking for some sort of lost innocence in one of the most hedonist decades in memory. Leaving such philosophical matters aside, it must be stated that this is, overall, a concise and very compelling collection of pop songs, highly recommended to fans of the genre, as the best tracks easily stand head and shoulders above the 2009-2010 competition. ~ Mariano Prunes, Rovi