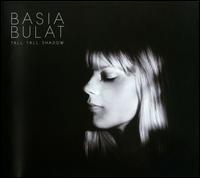 On her third offering in six years, Basia Bulat has evolved from being an intimate, folk-oriented Canadian songwriter to swinging for the indie pop fences. On Tall Tall Shadow she embraces a bright, expansive, dynamic soundscape, where her heretofore trademark autoharp has been all but left in the corner. Co-produced by the artist with fellow Canadians Tim Kingsbury of Arcade Fire and engineer Mark Lawson, and mixed alternately by Lawson and Howard Bilerman (Bulat's former producer), these ten songs reveal true musical growth, as hooks and infectious melodies abound. She plays piano, organ, Wurlitzer, guitar, and yes, sometimes autoharp, and a mean, fingerpopping Rhodes piano on the opening title track, "Five, Four" (which is, of course, in 5/4 time; cue Dave Brubeck), which commences with a driving acoustic guitar and eventually gathers storm force with rumbling drums, a ghostly organ, and atmospheric electric guitars. "Promise Not to Think About Love" updates the British girl pop sound of the 1960s with its skittering handclaps, swirling neo-psych bass organ and pianoette textures, carefully layered female chorus, clipped percussion, and reverb to spare. "The City with No Rivers" juxtaposes a charango, synths, electric guitars, and cello with a more complex melody anchored by a hummable chorus. "Someone" is perhaps the loveliest track here with its stuttered loops and percussion, anchored by a glorious series of changes played by Bulat on a Wurlitzer, a lonely violin, and a deft use of reverb in underscoring the sense of isolation and longing in the lyric. The only track that doesn't quite work is closer "From Now On," which sounds more like a Dido demo than a finished cut. While her musical appetite and formal execution have grown immeasurably, Bulat's lyrics haven't; they remain dangerously close to saccharine in places. That said, in songs with hooks this intricately constructed and effusively delivered vocals, they don't need to plumb the depths of profundity in order to resonate with listeners. Tall Tall Shadow is easily the songwriter's most fully realized effort; it should expand her audience reach considerably -- even if it leaves some of her more purist followers by the wayside. ~ Thom Jurek, Rovi