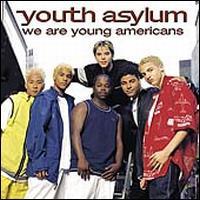 We Are Young Americans

Youth Asylum is "the only teen boy group who really are teenagers," asserts their press biography, noting that the sextet's ages range from 14 to 17. Whether that will help them emerge in the increasingly crowded teen pop market remains to be seen, but they are not noticeably inferior to more established acts in the same field. "No we don't come with an 'MMMBop,'" they sing on the statement-of-purpose lead-off track of their debut album, We Are Young Americans, "How We Comin'," "We gotta keep it real, and we won't stop/We take hip-hop, and we add a little pop/And now the young Americans is [sic] on the block." (The phrase "young Americans" is used in so many songs that you can't help wondering whether that was originally intended to be the group's name. They even borrow enough of David Bowie's hit "Young Americans" on "It'll Be Alright" to have had to give Bowie a songwriting credit.) The group's sound, masterminded by one St. Gien, who organized the ensemble, is lighter than that of some of their competitors, suggesting that they are targeting a younger demographic. The dance tracks, "Flashbacks" and "Put Your Hands Up," don't rock particularly hard, but there are plenty of mid-tempo ballads that either reflect on innocent love, promote racial tolerance, or decry school violence. As usual with this kind of music, the singers are all interchangeable tenors who harmonize or take individual lead lines without distinguishing or embarrassing themselves. The songs themselves are forgettable confections, with the exception of Diane Warren's "When I See You Smile," produced by David Foster, which sounds like every other Diane Warren song and David Foster production, i.e., like a melodic power ballad about idealized love, fashioned for adult contemporary radio. ~ William Ruhlmann, Rovi