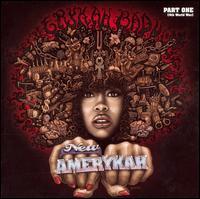 Downplayed and practically disregarded as it was, 2003's Worldwide Underground was an excellent and brave follow-up to 2000's Mama's Gun. Erykah Badu concedes she had nothing to say at the time -- the loose 50-minute "EP" was more about sounds than statements -- but she evidently holds herself to a high standard. Perhaps that streak was a factor in her protracted silence from its release to New Amerykah, Pt. 1: 4th World War; she even thought she might be through with making music. Her creative energy returned at some point, and then some, with this set apparently just the first in a series of releases. Varied and layered, New Amerykah, Pt. 1 has Badu collaborating principally with the members of Sa-Ra (who are present in almost half of the tracks), Madlib, 9th Wonder, and Baduizm/Mama's Gun vets Karriem Riggins, James Poyser, and Ahmir Thompson. If you're familiar with what these people have made in the past, you'll know to expect plenty of fearless weirdness and a couple relaxed soul-jazz backdrops that do not fail to stimulate. The album is easily the most hip-hop and most out-there release from Badu thus far, with beats bumping, knocking, and booming in roughly equal measure, sometimes switching tacks or vanishing midstream, dropping down dark corridors, gradually levitating into direct sunlight. Lyrically, there's much to digest: in the ghostly-mystical "The Healer," Badu proclaims hip-hop to be bigger than religion and government; both "That Hump" and "The Cell" are vivid depictions of drug dependency; "Soldier" gives a shout to the Nation of Islam, addresses Katrina and black-on-black crime, and sends out a warning ("Now to folks that think they livin' sweet/They gone fuck around and push 'delete'"); "Twinkle" evokes a lot of thought with few words, alluding to the various failures of the U.S. health, education, and prison systems, and the negative and cyclical effects they've had on Badu's people. Though this is another album where you can only wonder how different it would be with some input from the late J Dilla, the beloved producer gets an incredibly touching tribute with the eight-minute "Telephone," written the day after the ceremony of his death. Indeed, no listed song is light in sentiment, which must partially explain why the beaming single "Honey" is included as an unlisted track -- it doesn't fit into the album's fabric, what with its drifting, deeply sweetened, synth-squish-and-string-drift groove. Immediately moving and yet rather bewildering, New Amerykah, Pt. 1 is an album that sounds special from the first play, yet it will probably take years before it is known just how special it is. ~ Andy Kellman, Rovi