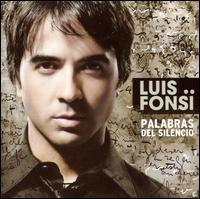 On his sixth album, Palabras del Silencio, Luis Fonsi continues to establish himself as one of Latin pop's most accomplished vocalists, one who is not only popular but creative. In several ways, his previous album, Paso a Paso (2005), was a breakthrough effort. With the exception of the English-language crossover album Fight the Feeling (2002), all of his prior albums were commercially successful, beginning with his debut album, Comenzaré (1998). It wasn't until Paso a Paso, however, that Fonsi took creative control of his music. On that album he co-wrote all of the songs except three, collaborated with producer Sebastián Krys, and spiced up his music with electric guitars and other unexpected sounds. The resulting album not only spawned a series of hit singles ("Nada Es Para Siempre," "Estoy Perdido," "Por Una Mujer," "Vivo Muriendo," "Paso a Paso") and led to a greatest-hits release, Exitos: 98:06 (2006); it was also critically acclaimed and established Fonsi as one of Latin pop's most accomplished vocalists. Palabras del Silencio is essentially a continuation of all that Fonsi accomplished with Paso a Paso: he is credited with co-writing all of the 13 songs, he collaborates once again with Sebastián Krys (plus producers Armando Ávila and Jacobo Calderón), and he adopts unexpected musical styles (e.g., the ranchera accents of lead single "No Me Doy por Vencido"). Also like Paso a Paso, Palabras del Silencio includes a bounty of potential hit singles. The aforementioned lead single, "No Me Doy por Vencido," is a clear highlight, its soaring chorus almost breathtaking. Other highlights include "Quien Le Va Decir," "Llueve por Dentro," "Aunque Estés con El," and "La Mentira" -- in other words, the first half of the album is full of standouts. While the second half of the album isn't as stellar, it includes plenty of notable songs, particularly "Todo Vuelve a Empezar," a duet between Fonsi and multilingual Italian superstar Laura Pausini that is a true collaboration -- written as well as sung together by the two -- and there's also "Aqui Estoy Yo," which features a quartet of international all-stars -- Fonsi (Puerto Rico), Aleks Syntek (Mexico), David Bisbal (Spain), and Noel Schajris (Argentina) -- and "Tienes Razon," a ballad that closes the album on a beautiful note. ~ Jason Birchmeier, Rovi