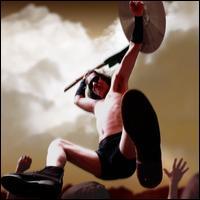 If ever a title explained an album's intent, it's Todd Rundgren's Arena, an explicit return to the extravagantly theatrical guitar rock he abandoned, largely out of boredom, some 25 years ago. During that quarter century, Rundgren touched upon almost all of his other obsessions, spending a considerable amount of time fixated upon technology, but deliberately avoided anything resembling Utopia until he stepped in for an absent Ric Ocasek for the 2005 Cars reunion which followed on the heels of Liars, Todd's strongest and poppiest album in years. The New Cars -- as the reunited band was wittily dubbed -- returned Rundgren to arenas and reignited his interest in outsized rock & roll, so he threw himself into a project that gave him an excuse to sing skyscraper hooks and play too much guitar, which is exactly what Arena promises and delivers. Apart from an occasional glimpse of computer-stitched seams, the album is an uncanny recreation of Todd's late-'70s/early-'80s period, occasionally playing like a belated sequel to 1983's The Ever Popular Tortured Artist Effect. On a pure sonic level, this may be true -- especially when he glides into a glimmering, quietly insistent pop tune like "Courage" -- but the aesthetics are sharply different, as Rundgren never indulges in the impish humor that surfaced continually on Tortured Artist, preferring to stew in the outrage that fueled Liars. Opening with the outright threat "Mad," Arena roils with fear and frustration, manifesting in gnarled knots of guitars and cavernous drumbeats, not to mention staccato successions of blunt, one-word song titles. Just as it did on Liars, this fury ties Arena together but thanks to all the exaggerated gestures, this feels angrier as a whole, which makes it pretty bracing. Rundgren's deliberate dramatics also make the gentler songs seem sweeter, but also make his sardonic jokes and political protests -- which do come hand in hand, as on the soldier-chant chorus of "Gun" -- draw blood. And that may be the most curious thing about Arena: musically, it's an unabashed throwback, having nothing to do with what arena rock is in 2008, but Todd's songs are all about the conflicted, confused present. This seeming paradox doesn't turn Arena into a muddle but instead gives it some invigorating friction that makes the album seem urgent and captivating, if not necessarily vital. ~ Stephen Thomas Erlewine, Rovi