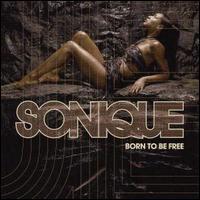 Born to Be Free

After slogging it out on the British dance music scene for over a decade, contributing to records by S-Express, William Orbit's Bass-O Matic, and one-hit wonders Gusto, Ken Doh, and Josh Wink, DJ and vocal diva Sonique finally got her big break in 2000 when her club smash "It Feels so Good" topped the chart in the U.K. and reached number eight in the Billboard Hot 100. But after scooping the Best Female Solo Artist at the Brit Awards, she succumbed to the fate of fellow winners Shola Ama, Des'ree, and Ms. Dynamite by failing miserably to consolidate her success with her follow-up. Indeed, while her first album, Hear My Cry, effortlessly achieved multi-platinum status, sophomore effort Born to Be Free limped in at a disappointing number 184, selling barely a fraction of as that of its predecessor. It's a puzzling reversal of fortunes, considering that its 14 tracks, produced by the likes of Rob Davis (Kylie Minogue) and Rick Nowels (Madonna), are just as accomplished and eclectic, taking in a whole host of floor-filling sounds to create the same dance compilation vibe as Sonique's debut. Her trademark brand of glossy, string-soaked Euro-dance still remains her most prominent sound, as shown on the emotive hook-laden "Hold Me Now," the haunting, operatic "Love Washes Away," and the plucked guitar-led lead single "Can't Make Up My Mind." But elsewhere, she also tackles pulsating progressive techno, as on the Underworld-esque "Will You Still Want Me," skittering drum‘n'bass on the hypnotic Roni Size-produced "Right Here You an' I," and even old-school R&B on the Soul II Soul-influenced "Seriously," with just as much conviction. There might not be anything as gloriously anthemic as the three singles from her debut, but the likes of "Alive," a brooding slice of downbeat dance-pop which appears to borrow the guitar hook from Radiohead's "Street Spirit," the addictive 2-step garage-fused "You're the Reason," and the HI-NRG Euro-house of "I'm Gonna Love You," which sounds like a Culture Beat record from 1993, are all worthy of gracing the upper reaches of the charts, as well as the dancefloor. The album runs out of steam toward the end, particularly on "Please," a rather tuneless attempt at early-'90s New Jack Swing, and the pedestrian Sonique Beatmix of "Can't Make Up My Mind," which adds nothing to the original. Overall, however, its inventive production, infectious tunes, and Sonique's distinctive Anita Baker-esque vocals ensure that Born to Be Free is a much better listen than its dismal chart position suggests. ~ Jon O'Brien, Rovi