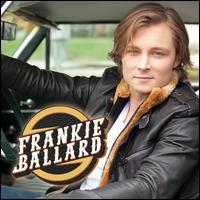 The self-titled freshman album by Frankie Ballard, the winner of Kenny Chesney's Next Big Star regional competition in Michigan in 2008, is a scant eight tracks, a little over 27 minutes, and the safest bet Nashville could place on a new artist in an uncertain 21st century music biz. The Michael Knox-produced effort opens with one of its two preceding singles, "A Buncha Girls," co-written by Ballard with Ben Hayslip, Dallas Davidson, and Rhett Atkins. It's also the set's strongest track, as it revs up big midwest guitar rock à la John Mellencamp, tempered by banjos and pedal steel, and extremely crisp snare and kick drums. It's a fist-pumping, good-time anthem. Come to think of it, most of this record is flavored the same way, subsequent tracks "Single Again" and "Place to Lay Your Head" follow suit; and the album's other early single, "Tell Me You Get Lonely," is a midtempo rocker with the same big guitars and a Hammond B-3 for ballast. Up front is Ballard's voice, young, strong, ringing out crystal clear. Here, too, the Mellencamp influence is undeniable in Ballard's phrasing -- and perhaps overwhelming. Knox and the studio band play this up to a near fault, because these songs, decent though they may be, don't reach his influence's level. And while his guitar playing is better than adequate, the sounds are so generic, it's tough to tell his style from the session's other slinger, Adam Shoenfeld. Ballard's debut doesn't have any inherently weak tracks, but it doesn't possess any extraordinarily strong ones, either. It is a slight slice of good-time, contemporary radio, ear candy country. It will work in the clubs, it'll work in the car, and is virtually indistinguishable from what passes for Top 40 in Nash Vegas' rigid format. ~ Thom Jurek, Rovi