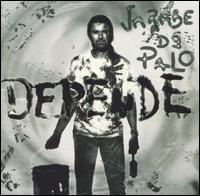 The title track of Jarabe de Palo's debut album, La Flaca, which won the prestigious Spanish Ondas Award for Best Song and Best New Artist kudos for lead singer and songwriter Pau Donés, was just so darn irresistible, so convincingly authentic, so undeniably sincere in its longing for a skinny girl glimpsed dancing in Havana, that it was hard to find anything bad to say about the group from Barcelona, except maybe that their name was odd. Donés turns out to have been one of those kids who had to keep switching schools because he picked so many fights, and in Spain what one prescribes for such a kid is a "jarabe de palo," the kind of cure that comes down to a good old-fashioned whupping. It's a phrase akin to threats to "fix your wagon." Unwilling to endure any more blows -- and above all, dismissal as a one-hit wonder -- Donés waited to tour until after his band's 1998 follow-up, Depende, exceeded all critical and commercial expectations. Depende is an outstanding album by any measure, the work of an already mature talent who more than holds his own with collaborators Ketama -- famous in Spain as pioneers of the nuevo flamenco movement -- and the inimitable Celia Cruz, who celebrates her friendship with Donés on "Lo Loco," the album's jubilant finale. Donés mostly playing acoustic guitar, and Mariá Roch and Jordi "Sugar Sweet" Mena on bass and lead, ground all the songs on Depende in the blues, while rhythm section Alex Tenas and Daniel Forcada and keyboardist Toni "Chupi" Saigi top them with a generous splash of salsa. Donés has often acknowledged the impact that the death of his mother when he was 16 had on his music and lyrics, which are characteristically upbeat without being glib, intelligent without being obscure, and philosophical without being self-important; this time around, the shadows of a more recent loss add further depth and texture to the portraits he paints. Title track "Depende" finds beauty in the uncertain nature of human life and love, while "Agua" tells the saddest kind of story, avoiding confessional excess with spare instrumentation and an extended metaphor that actually works. In "Te Miro y Tiemblo," it's Donés' skillful experiment with a flamenco vocal style that haunts the heart. And in the center of the album, poised to counter any rash pronouncements about the mellowing effects of time and age, is Donés' snarling yet wonderfully danceable self-portrait as a "Perro Apaleao" -- a beaten dog. You've beaten him, bruised him, frozen him, caged him -- all the while with that insufferable look on your face -- and there's no way you'll get away with that again. Take the Jarabe de Palo you've got coming to you; you might not even be able to take it out of your CD player by the time it's over. ~ Jenny Gage, Rovi