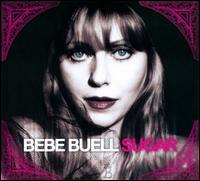 Bebe Buell has led a very rock & roll life, but while she's fronted several bands and made a few records (some of them quite good), she's still best known as a model (both high fashion and in a celebrated layout for Playboy), and for having been romantically involved with more than a few well-known musicians, most notably Todd Rundgren and Steven Tyler, but also Elvis Costello, Stiv Bators, Coyote Shivers, and a handful of others. Given her history, Buell has had to struggle with folks not taking her seriously as a singer and songwriter, and her album Sugar feels like a conscious effort to convince listeners that she's a "serious" musical artist. Opening with the autobiographical "When We Were Godhead," Sugar collects a handful of tunes (most penned by Buell) about love, desire, and betrayal cast in various shades of darkness, and the production by Bobbie Rae and Jimmy Walls is dominated by synthesizers, club beats, and distorted guitar figures, as if Buell was trying to become a mature, goth-leaning version of Lady Gaga. Truth to tell, Buell is a far more interesting vocalist than Gaga -- time is starting to catch up with her instrument, but her performances are smart and emotionally compelling, reminiscent of Patti Smith and Marianne Faithful, and when she connects with a song, she delivers some of the best vocal work of her life. However, she's not well served by the musical backdrops, which come off as pretentious and at least a decade out of date, especially when Buell is trying hardest to impress us with the gravity of this material. Sugar confirms that Bebe Buell is a gifted singer with plenty to say that's worth hearing, but she clearly needs the right collaborators to make the breakthrough album she's capable of, and they aren't the people who were in the studio when she made this. ~ Mark Deming, Rovi