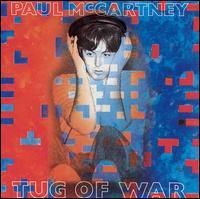 Reuniting with producer George Martin was a bit of a masterstroke on the part of Paul McCartney, since it guaranteed that Tug of War would receive a large, attentive audience. Martin does help McCartney focus, but it's hard to give all the credit to Tug of War, since McCartney was showing signs of creative rebirth on McCartney II, a homemade collection of synth-based tunes. This lush, ambitious, sprawling album couldn't be further from that record. That was deliberately experimental and intimate, while this is nothing less than a grand gesture, playing as McCartney's attempt to summarize everything he can do on one record. There's majestic balladry, folky guitars, unabashed whimsy, unashamed sentimentality, clever jokes, silliness, hints of reggae, a rockabilly duet with Carl Perkins, two collaborations with Stevie Wonder, and, of course, lots of great tunes. If anything, McCartney's trying a bit too hard here, and there are times that the music sags with its own ambition (or slightly dated production, as on the smash single "Ebony and Ivory"). But, at its best -- the surging title track, the giddy "Take It Away," the vaudevillian stomp "Ballroom Dancing," the Lennon tribute "Here Today," the wonderful "Wanderlust" -- it's as good as McCartney gets. ~ Stephen Thomas Erlewine, Rovi