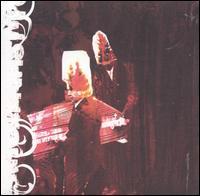 Dear Diary, My Teen Angst Has a Bodycount

From First to Last

Since the early 2000s, what's now known as post-hardcore has been consistently codified into something eminently marketable. Screaming bloody murder over churning angular guitars has suddenly salable qualities, as long as the rage is offset by whimpering pianos and heart-flailing harmonies. This systemization isn't necessarily bad, as the groups it affects often make very arresting music. But that doesn't mean the formula itself isn't questionable. In 2004 From First to Last unleashes its first full-length via Epitaph, after debuting with an EP for the tiny New York imprint Four Leaf. And it has the right idea, using dense lyricism and inventively propulsive drumming to separate Dear Diary, My Teen Angst Has a Bodycount from the teeming post-hardcore pack. But like so many of its peers, FFTL tempers its fury with oddly soft-focus introspection. Derek Bloom's incredible drumming drives de facto opener "The One Armed Boxer vs. the Flying Guillotine" through its wildly shifting time signatures, and the clipped guitars flail appropriately. "Note to Self," too, incorporates metal pacing and a flurry of double bass kicks. But the dark energy in these introductory tracks dissipates in the carnival synthesizers and music box effects of "I Liked You Better...," which suggests blink-182's awkward dalliance with its serious side. This isn't a slight on From First to Last's emotional fragility -- after all, everybody hurts. But what happened to the rock? Why does the post-hardcore ethos demand milky melancholy as a bed partner to vicious screamo and post-hardcore rhythms? "Thunderstorms could never stop me," the straight acoustic balladry of "Emily" croons. "'Cause there's no one in the world like Emily." Emily, if you're reading this, you really screwed this kid up. Later, he's listening to Morrissey in his car, and deciding self-pity is better than relationship torture. An album title like Dear Diary, My Teen Angst Has a Bodycount seems to imply a needling of the very formula, and name-checking the Moz admits how overwrought it can all really be. But From First to Last sounds too sincere in its sadness to be kidding. Luckily, the anger rocks. "Kiss Me, I'm Contagious" chases Diary's tears with cocksure lyrics, stuttering percussion, and raw dual vocals. And "Ride the Wings of Pestilence," despite its needlessly weighty title, is an explosion of great ideas that proves the potential in From First to Last to break the mold wide open. More rock, less schlock! ~ Johnny Loftus, Rovi