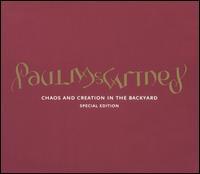 Chaos and Creation in the Backyard [Special Edition]

Quiet though it may be, Paul McCartney experienced something of a late-career renaissance with the release of his 1997 album Flaming Pie. With that record, he shook off years of coyness and half-baked ideas and delivered an album that, for whatever its slight flaws, was both ambitious and cohesive, and it started a streak that continued through the driving rock & roll album Run Devil Run and its 2001 follow-up, Driving Rain. For Chaos and Creation in the Backyard, the follow-up to that record, McCartney tried a different tactic, returning to the one-man band aesthetic of his debut album, McCartney, its latter-day sequel, McCartney II, and, to a lesser extent, the home-spun second album, Ram. Apart from a guitar part or two, a couple of drum tracks, and, of course, the strings and horns that pop up now and again, McCartney played everything here, from the guitars and keyboards down to the bass and drums. The difference here is that instead of producing the record by himself, McCartney brought in alt-rock auteur Nigel Godrich, best known as the producer behind Radiohead's OK Computer and Beck's Mutations, as well as being the only producer responsible for a streamlined Pavement record. Godrich has a gift for making messy or difficult music sound simple, logical, and clean, and he has that same effect on Chaos and Creation, removing the obvious rough edges and home-spun charm that characterized Macca's previous one-man affairs. Consequently, Chaos sounds as polished as a normal McCartney album, as polished as Driving Rain, but the process of its creation and recording does make this a very different album from not just its predecessor, but from most of McCartney's solo albums. It's quiet and meditative, not without its share of eccentricities, nor without its share of sprightly tunes -- certainly, the opener, "Fine Line," is a propulsive, hooky song that burrows into your head after just one spin and sounds like a tune you've known all your life, and "Promise to You Girl" also zips along nicely -- but the overall feel of the record is one that's reflective and ruminative, not messy or silly. Or whimsical or treacly, for that matter, since the combination of introspective ballads and intricately detailed but not overly fussy or polished production means that Chaos and Creation in the Backyard is a rare thing indeed: a McCartney album that's devoid of cuteness or easy sentiment. Which doesn't mean that it's somber or lacking in romantic material -- Paul loves his love songs, after all -- but the tone and timbre of the album is so simple, stripped-down, and sincere that all the music resonates a little deeper and feels a little more heartfelt. If there are no outright knockouts here, there are no weak spots, either, and if the album doesn't have the sprawl and quirks or overt humor of his classic solo albums from Ram through Tug of War, that's OK, because Chaos and Creation in the Backyard offers something different: not only is Paul in an unusually reflective mode, but he's made a lean, cohesive record that holds together better than his previous latter-day high-water mark, Flaming Pie -- which is unusual, since McCartney albums rarely, if ever, come without spots of filler. The quiet nature of Chaos and Creation may mean that some listeners will pass it over quickly, since it's a grower, but spend some time with the record and it becomes clear that McCartney is far from spent as either a songwriter or record-maker and, in many ways, continues to make some of the best music of his solo career. [Chaos and Creation in the Backyard was also released in a special edition containing a bonus DVD with a documentary, an animated film, and a studio performance video of "Fine Line."] ~ Stephen Thomas Erlewine, Rovi