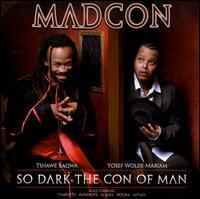 So Dark the Con of Man [Bonus Tracks]

Hardly a hotbed of hip-hop, Norway is the homeland of Madcon, one of the most exciting European pop-rap act of the late 2000s. Often compared to internationally popular American pop-rap acts such as Black Eyed Peas, Gnarls Barkley, and OutKast, the Oslo-based duo is comprised of Kapricon (born Tshawe Baqwa) and Critical (Yosef Wolde-Mariam), nimble English-language rappers who have a knack for melodic hooks and who aren't afraid to sing them with zeal. Their second album, So Dark the Con of Man, showcases them at their energetic and charismatic best, particularly on the chart-topping lead single, "Beggin'." The album's opening song, "Beggin'" is a dramatic remake of an old Frankie Valli & the Four Seasons hit from 1967 that was first revived in 2007 for a series of Adidas television advertisements. Produced by 3Elementz, the Madcon version of "Beggin'" is a tailor-made pop-rap smash featuring an uptempo dance beat, a melodic singalong hook, and propulsive lovesick raps. Indeed, the craftsmanship of 3Elementz, a Norwegian production trio comprised of Hitesh Ceon, Kim Ofstad, and Jonny Sjo, is a major aspect of So Dark the Con of Man's broad appeal. The trio's productions, which also include the standout tracks "The Way We Do Thangs" and "Back on the Road," featuring the Paperboys and Timbuktu, respectively, are marvelously dynamic. Far from typical, the productions draw from contemporary R&B and dance as well as pop-rap, incorporating everything from piano and guitar to off-kilter boom-bap beats. Madcon themselves are also far from typical. They sing their hooks with a comfort and ease unimaginable in the American rap scene, where, for example, Kanye West's singing experiment, 808s & Heartbreak (2008), was considered bold and daring -- and, in the opinions of some, ill-advised. Moreover, the raps of Kapricon and Critical tend to be positive-themed, and fun and loving in spirit. This is also a departure from typical rap music, particularly of the European variety, which tends to be province of disenfranchised immigrants who rail against the ills of society. All of this makes the frequent comparisons drawn to Black Eyed Peas, Gnarls Barkley, or OutKast -- or the Fugees, another good point of comparison -- fitting if too easy. Like these similarly internationally popular groups, Madcon are a feel-good pop-rap group graced with melodic hooks and dynamic productions that draw from a variety of contemporary styles. That they're Norwegian simply adds to their novelty. ~ Jason Birchmeier, Rovi