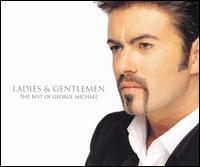 When George Michael was riding high on the charts, only a handful of critics acknowledged that he was a brilliant mainstream pop singer/songwriter who, at his best, rivaled his idol Elton John in crafting state-of-the-art pop songs and productions. For nearly a full decade, he was a superstar in his native U.K. and the U.S., and even when Older failed to win an American audience, he retained his stranglehold on the British and European charts. As a solo male hitmaker, virtually nobody could touch him between 1984 and 1994, and even when his grasp began to slip, he still made compelling music. All of this is proven by his first hits compilation, Ladies & Gentlemen: The Best of George Michael. Spanning two discs, 28 songs, and two distinctive halves -- one "For the Heart" (ballads), one "For the Feet" (dance tunes) -- the collection is a monster, as impressive for its size as it is for its achievements. To some casual listeners, the sheer scope of the collection may seem overwhelming, since it doesn't just have the hits, but also rarities, compilation tracks, lesser-known singles, and duets. Of course, that's precisely what makes it worthwhile for anyone who owns all the albums. (They'll also be interested that many of the mixes sound slightly different -- as if the masters were run through the antiquated "Q Sound" process that marred Madonna's similar Immaculate Collection.) And some skeptics may be swayed after listening to the individual discs, which are surprisingly consistent works that reveal forgotten gems, and thereby the true depth of his talent. It is true that listening to both discs in a row is a little exhausting, but there's little question that Ladies & Gentlemen comes close to being definitive. [Epic released an Australian edition with a slightly different track listing.] ~ Stephen Thomas Erlewine, Rovi