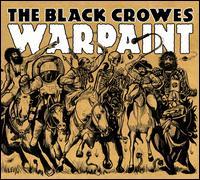 Looking back, it seems inevitable that the Black Crowes would suffer a rocky middle age. Young bands yearning to be old tend to stumble when the years start to pile up, once hunger and ambition start to fade into the ceaseless grind of the road, and the Crowes were no exception. After they mapped out the furthest reaches of their world on 1994's Amorica they slowly spun their tires, turning out records both respectable and tired, before internal tensions slowly tore the brothers Robinson apart, leading to a split in 2002, not long after the release of their sixth album, Lions. A few years of solo wanderings led the Crowes to a reunion in 2005, but they had to go through a few more lineup changes -- including the addition of North Mississippi Allstar Luther Dickinson as the replacement for guitarist Marc Ford -- before they buckled down to record their seventh album, 2008's Warpaint. All that turmoil and trouble are felt on Warpaint, as are the years the band spent paying dues on the jam band circuit after Amorica. Warpaint shows that the decade of hard struggle gave the Crowes soul and chops, turning them into the band they've always wanted to be. The Black Crowes haven't changed their basic sound -- ever since Shake Your Money Maker the band has always drawn deeply from the Stones and Faces, tempering that British swagger with Southern-fried blues borrowed from the Allmans, then slowly threading hippie mysticism throughout -- but the feel of the band has changed, as the Crowes have turned from reckless ruffians into seasoned veterans, with the group feeling lived-in and genuine. There's depth here, highlighted by an instrumental suppleness that slightly recalls Little Feat -- particularly on the slow-rolling "Oh Josephine" with its gently cascading choruses -- an evolution that could only be earned during those years on the road, building the band through nightly jams and a slow cycle of membership turnovers. This is a suppleness that has grit, thanks especially to Dickinson's glass slide runs that give this music some welcome grease. The Crowes also pull off a couple of sly moves here, weaving some swirling psychedelia through the chorus of "Movin' on Down the Line," turning the Reverend Charlie Jackson's "God's Got It" into a heavy, heavy backwoods stomp, then spinning the closing "Whoa Mule" into a roiling blues raga. These are the turns and tricks of veterans, who can slide these flourishes into their signature sound without calling attention to their changeups, but these numbers are enough of a departure to garner attention -- what may not get as much praise is how the Crowes write compellingly within their standard sound, as they do here, beginning with the opening gambit of the down'n'dirty "Goodbye Daughters of the Revolution" and the crawling "Walk Believer Walk." From there, Warpaint continues to gain momentum, as this album is not only their strongest set of songs since Amorica, it has a depth and presence that is rare for a digital age creation and, best of all, the album has a true narrative thrust, making it feel like a true classic rock album. What the Black Crowes have done here is what true journeymen do: they don't renounce their past, they build upon it, finding hidden depths within it, shaping tradition after their own image to make it sound fresh. They're old-fashioned, but in the best sense: they're in it for the long haul, which the superb Warpaint proves beyond a shadow of a doubt. ~ Stephen Thomas Erlewine, Rovi