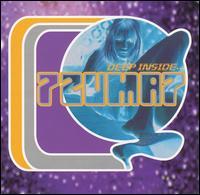 The stoner metal movement of the late ‘90s was primarily based in the U.S., but other areas of the world spawned similarly styled outfits as well, including Eindhoven, Holland's 7 Zuma 7. Formed in the middle of the decade, the group's original line-up consisted of singer/guitarist Jerry van Eyck, guitarist John Peate, bassist Nick Sanders, and drummer Jacco van Rooij. 1997 saw the release of a self-titled, five song EP, which led to appearances at such music festivals as the Dynamo Open Air 1996 and 1998 and Lowlands 1998, and made a major fan out of Monster Magnet frontman Dave Wyndorf. December of 1998 saw Sander's exit from the band, as two bassists attempted to fill the vacant spot over the course of 1999 (first up was Ronald Herregraven, next was Arjen Rienks), before newcomer Miranda Vandervoot was welcomed onboard permanently. The same year, 7 Zuma 7 issued their debut full-length, Deep Inside, which featured a spirited cover of the Who classic, "The Seeker." ~ Greg Prato, Rovi