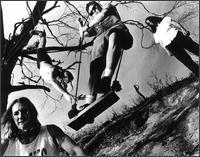 One of the more original guitarists to emerge from the early '90s alt-rock boom was Tool's Adam Jones - who managed to combine the heavy riffs of such renowned hard rock/metal players as Jimmy Page and Tony Iommi with the artiness of Dave Navarro and Robert Fripp. Born on January 15, 1965 in Libertyville, Illinois, Jones' introduction to music was originally via the violin, which he began playing while in elementary school. By his freshman year of high school, Jones traded in his violin for a bass, as he played in his school orchestra and later, in a rock band called Electric Sheep with future Rage Against the Machine guitarist Tom Morello. It wasn't long before Jones picked up the six-string himself, and although he received a music scholarship to a college, opted to go to the Hollywood Makeup Academy, instead (during which time Jones studied film, as well). It was there that Jones also learned about movie special effects, which he would later put to use in his future band. Upon graduation, Jones took a position at Rick Lazzarini's 'the Character Shop,' which eventually led to work on both TV shows and movies (including Nightmare on Elm Street Part 5, Ghostbusters 2, and Terminator 2, among others).

It was while in California that Jones met singer Maynard James Keenan, who was signing with goof-metallists Green Jelly (a group that Jones was helping with costume designing). It wasn't long before the duo united together to form a group - welcoming aboard bassist Paul D'Amour and drummer Danny Carey by the early '90s, which led to the formation of Tool. The quartet soon became one of alternative/hard rock's most challenging bands, on the strength of the 1992 EP Opiate and 1993's full-length debut, Undertow. In addition to their music, it was the group's imaginative and cutting edge videos that created a buzz around the band, which were directed and conceived by Jones himself (the guitarist also built the sets and tiny clay-mation characters, as well). Although D'Amour left the group around this time (replaced by Justin Chancellor), Tool continued to grow in popularity, as they sporadically issued such further albums as 1996's Aenima and 2001's Lateralus, which catapulted the group to arena headlining status throughout the world. Besides his Tool duties and film/special effects work, Jones formed a side band with Melvins' guitarist Buzz Osbourne called Noiseland Arcade (the group have yet to issue any recordings, however), and played on the 15-minute track "Divorced" off of the Melvins' 2000 release, the Crybaby. The same year, Jones supplied the album cover artwork to a reissue of the lone album by Chancellor's previous band, Peach (Giving Birth to a Stone). ~ Greg Prato, Rovi