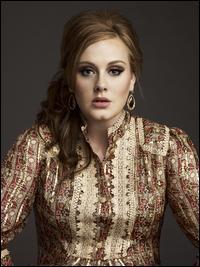 When the U.K. press began dubbing Adele "the next Amy Winehouse" in late 2007, the hype didn't touch upon the heavy singer/songwriter influence found in the Londoner's music. Influenced by Suzanne Vega as much as Jill Scott, Adele first made an impression in 2006 when she toured as an opening act for Jack Penate. She had graduated to headlining status by the end of 2007, thanks to BBC Radio 1 playing her single "Daydreamer"; another song, "Hometown Glory," was also released as a single on Jamie T.'s label, Pacemaker. An appearance alongside Paul McCartney and Björk on the BBC 2 television show Later with Jools Holland came next, and a recording contract with XL Recordings was finalized soon after. Early 2008 brought similar luck as Adele found herself atop the BBC's new music talent list, which was compiled from the votes of 150 music critics. That same January, XL issued a new single, "Chasing Pavements," along with her debut album, 19. The title reflected Adele's age at the time of the album's release, and its popularity resulted in the release of several bonus editions throughout the year. Also in 2009, Adele won Grammy Awards for Best New Artist and Best Female Pop Vocal Performance.

Her sophomore album, 21, featuring the gospel and disco-infused single "Rolling in the Deep," was released in February of 2011. The album proved to be both a critical and commercial success, becoming one of the longest-running number one albums in history and spending over 18 weeks at the top spot. The glow of 21's success was dimmed somewhat when Adele was forced to cancel her tour after suffering a hemorrhage on her vocal chords. She underwent surgery for the hemorrhage in November of 2011. That same month, she released the concert CD/DVD Live at the Royal Albert Hall. Both Adele and 21 received many end-of-year honors, and in February 2012, as album sales began to creep closer to ten million copies, she won six major Grammy awards, one of the few artists in history to accomplish the feat in one night. In October 2012, Adele announced that she had recorded the theme to the 23rd Bond film, Skyfall. Produced by Paul Epworth and recorded at the prestigious Abbey Road Studios, the single entered the top 10 of both the UK singles chart and the Billboard Hot 100 on release. By early 2013, 21 had registered sales of over 25 million copies. ~ David Jeffries, Rovi