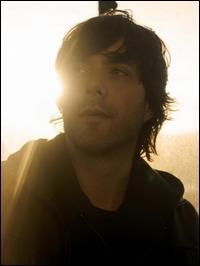 Adrian Stern is a Swiss pop singer/songwriter/guitarist who writes and sings in the schwiizerdüütsch dialect typical of the Zürich region. Based in Baden, a town of roughly 15,000 people in the Aargau canton about 25 kilometers northwest of Zürich, Stern made his independent recording debut in 2003 with a self-titled album on the label SME. In 2005 he made his major-label debut, S'Blaue vom Himmel, on Sony BMG, followed by Lieber Leider in 2008. These major-label albums proved highly popular in Switzerland, where pop singer/songwriters like Stern generally sing in standard German or English rather than in a Swiss German dialect; S'Blaue vom Himmel was a Top Five hit on the Swiss albums chart while Lieber Leider was a Top Ten hit. Moreover, the latter spawned a couple minor hit singles: "Unhaltbar" and "Lieber Lieder." In addition to his recording work, Stern performs live with a band including Simon Kaufmann (bass, vocals), Simon Kistler (drums, vocals), and Philippe Kuhn (keyboards). ~ Jason Birchmeier, Rovi