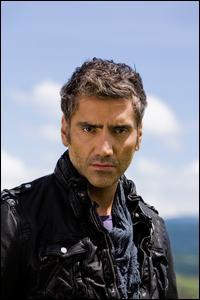 One of Mexico's biggest international superstars around the turn of the millennium, Alejandro Fernández first established himself in the early '90s as a champion of ranchera music before crossing over to the Latin pop mainstream in 1997 with the chart-topping album Me Estoy Enamorando. Born on April 24, 1971, in Guadalajara, Jalisco, Mexico, Fernández is the son of ranchera icon Vincente Fernández, which inspired the media to nickname him El Potrillo (the Little Colt). Beginning with his self-titled debut album in 1992, Fernández followed in the footsteps of his father, performing traditional Mexican music of the Jalisco region such as mariachi. While this phase of Fernández's career -- including the albums Alejandro Fernandez (1992), Piel de Niña (1993), Grandes Exitos a la Manera de Alejandro Fernandez (1994), Que Seas Muy Feliz (1995), and Muy Dentro de Mi Corazón (1996), all of which were produced by Pedro Ramírez -- spawned a steady series of hit singles, his career skyrocketed to new heights of success with the release of Me Estoy Enamorando (1997). Produced by Emilio Estefan, Jr. and Kike Santander -- far and away the preeminent Latin pop production team of the era -- the album marked the crossover of Fernández into the realm of mainstream pop. Not only did Me Estoy Enamorando itself top Billboard's Top Latin Albums chart; it also spawned four Hot Latin Tracks chart-toppers: "Si Tú Supieras," "En el Jardín" (a duet with Gloria Estefan), "No Sé Olvidar," and "Yo Nací Para Amarte." As if to reassure his fan base that he hadn't abandoned his roots, Fernández reunited with longtime producer Pedro Ramírez next and returned to ranchera music on Mi Verdad (1999) before collaborating once again with Estefan and Santander on another pop-oriented chart-topper, Entre Tus Brazos (2000). In subsequent years, Fernández continued to alternate between traditional albums of ranchera music (Orígenes, 2001; Niña, Amada Mía, 2003) and those oriented toward contemporary Latin pop (A Corazón Abierto, 2004; Viento a Favor, 2007). In addition, he began regularly releasing live in-concert albums (Un Canto de México, 2002; En Vivo: Juntos por Ultima Vez, 2003; México-Madrid: En Directo y Sin Escalas, 2005) and also released his first greatest-hits collection, 15 Años de Éxitos (2008). Following the end of his seven-album contract with Sony, he left the label and signed to Fonovisa. Sony then tried to release an album of his previously unreleased tracks; Fernández sued, and 6000 copies of the album were seized by police. In 2009, under his new label, he launched an ambitious project called Dos Mundos, which consisted of two separate albums, Evolución and Tradición, released on the same day -- the former more Latin pop, the latter traditional ranchera and mariachi music. He then took the new music on tour, resulting in the live album Dos Mundos: Revolución (2010). ~ Jason Birchmeier, Rovi