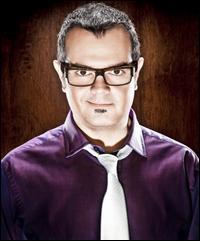 Mexican Aleks Syntek was born in Mérida on September 29, 1969. This talented musician has been involved in many different projects such as advertisements, TV shows, and movies. By the late '80s, Syntek, along with two friends, decided to form an alternative band. Their first record, Hey Tú!, was released by EMI in 1990; it was followed by Más Fuerte de Lo Que Pensaba in 1993. That record included a contribution from former Doors keyboardist Ray Manzarek, who played on a track called "Nuestras Costumbres." Later, Aleks Syntek y la Gente Normal started touring Latin America, while their songs "Mis Impulsos Sobre Tí," "El Camino," and "Más Fuerte de Lo Que Pensaba" were climbing up the most important charts in Chile, Colombia, Puerto Rico, and Argentina. In 1995, Bienvenido a la Vida was released, followed by 1997's Lugar Secreto, produced by Rodolfo Cruz and Michael Rojkind. In addition, Aleks Syntek y la Gente Normal participated in the Latin tribute album to the British band Queen. In 1999, Syntek produced the Sexo Pudor y Lágrimas soundtrack and embarked on a solo career. In addition to his continued contributions to film soundtracks, Syntek maintained a steady output of albums throughout the 2000s, including De Noche en la Ciudad (2001), Multiple (2003), Mundo Lite (2004), and Lección de Vuelo (2007). ~ Drago Bonacich, Rovi