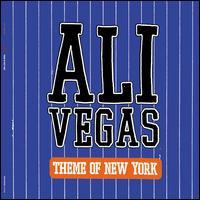 When South Jamaica, Queens, rapper Ali Vegas entered the New York hip-hop scene in the late '90s, he was labeled as the next breed of poignant and reflective rap artists to follow in the footsteps of that borough's important MCs, like Kool G Rap, Nas, and Mobb Deep. Nonetheless, during the 2000s the hype and his potential shot for hip-hop stardom succumbed to record label woes, delaying the release of his first official album. Vegas was first signed to Columbia through hitmaking production duo Poke & Tone and their Trackmasters imprint, but was dropped once Trackmasters lost the distribution deal in the early 2000s. The Queens rapper then signed to ex-Sony president Tommy Motolla's fledgling Casablanca Records; however, the label became inactive for some time after its star signee, Lindsay Lohan, was moved over to Motown by parent company Universal in 2006. In between record deals, Vegas was a regular on the New York mixtape circuit with various street releases and singles, which were sometimes intended as lead-up songs to his major-label debut, like "The AV Theme," a Kanye West production sampling the SpongeBob SquarePants theme. To avoid more industry red tape, he founded his own Council Recordings, but eventually wound up joining NBA player Lamar Odom's Rich Soil Entertainment in 2006 as its flagship artist. After all the troubles and tribulations, he prepped his self-titled, solo debut for a 2008 release. ~ Cyril Cordor, Rovi