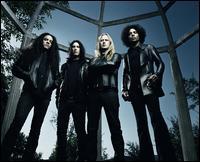 In many ways, Alice in Chains was the definitive heavy metal band of the early '90s. Drawing equally from the heavy riffing of post-Van Halen metal and the gloomy strains of post-punk, the band developed a bleak, nihilistic sound that balanced grinding hard rock with subtly textured acoustic numbers. They were hard enough for metal fans, yet their dark subject matter and punky attack placed them among the front ranks of the Seattle-based grunge bands. While this dichotomy helped the group soar to multi-platinum status with their second album, 1992's Dirt, it also divided them. Guitarist Jerry Cantrell always leaned toward the mainstream, while vocalist Layne Staley was fascinated with the seamy underground. Such tension drove the band toward stardom in their early years, but following Dirt, Alice in Chains suffered from near-crippling internal tensions that kept the band off the road for the remainder of the '90s and, consequently, the group never quite fulfilled their potential.

Staley formed the initial incarnation of the band while in high school in the mid-'80s, naming the group Alice N Chains. Staley met Cantrell in 1987 at the Seattle rehearsal warehouse the Music Bank and the two began working together, changing the group's name to Alice in Chains. Cantrell's friends Mike Starr (bass) and Sean Kinney (drums) rounded out the lineup, and the band began playing local Seattle clubs. Columbia Records signed the group in 1989 and the label quickly made the band a priority, targeting heavy metal audiences. Early in 1990, the label released the We Die Young EP as a promotional device and the song became a hit on metal radio, setting the stage for the summer release of the group's debut, Facelift. Alice in Chains supported the album by opening for Van Halen, Poison, and Iggy Pop, and it became a hit, going gold by the end of the year. As the band prepared their second album, they released the largely acoustic EP Sap in 1991 to strong reviews.

Prior to the release of Alice in Chains' second album, Seattle became a media sensation thanks to the surprise success of Nirvana. As a result, Alice was now marketed as an alternative band, not as a metal outfit, and the group landed a song, the menacing "Would?," on the Singles soundtrack during the summer of 1992. "Would?" helped build anticipation for Dirt, the group's relentlessly bleak second album that was released in the fall of 1992 to very good reviews. Following its release, Starr left and was replaced by Mike Inez. Dirt went platinum by the end of 1992, but its gloomy lyrics launched many rumors that Staley was addicted to heroin. Alice in Chains soldiered on in the face of such criticism, performing successfully on the third Lollapalooza tour in 1993, which helped Dirt reach sales of three million.

The band released the low-key EP Jar of Flies in early 1994. It debuted at number one upon its release, becoming the first EP to top the album charts. Despite the band's continued success, they stayed off the road, which fueled speculation that Staley was mired in heroin addiction. Later that year, Staley did give a few concerts as part of the Gacy Bunch, a Seattle supergroup also featuring Pearl Jam's Mike McCready, the Screaming Trees' Barrett Martin, and John Saunders. The group subsequently renamed itself Mad Season and released Above in early 1995. Later that year, Alice in Chains re-emerged with an eponymous third album, which debuted at number one on the American charts. Again, the band chose not to tour, which launched yet another round of speculation that the band was suffering from various addictions and were on the verge of disbanding. The group did give one concert -- their first in three years -- in 1996, performing for an episode of MTV Unplugged, which was released as an album that summer. Despite its success, the album did nothing to dispel doubts about the group's future and neither did Cantrell's solo album, Boggy Depot, in 1998.

Cantrell basically released Boggy Depot because he couldn't get Staley to work, but its very existence -- and the presence of Inez and Kinney on the record, not to mention Alice producer Toby Wright -- seemed to confirm that the group was on moratorium at best, and defunct at worst. Staley, for his part, stayed quiet, conceding his spot on Mad Season's second album to Screaming Trees singer Mark Lanegan. In 1999, Sony put together a three-disc Alice in Chains box set, Music Bank, divided between the group's best work and assorted rarities. At the turn of the new millennium, Columbia Records issued Live, which plucked material from bootlegs, demos, and festival shows covering the years 1990, 1993, and 1996.

As if the group hadn't been repackaged as many times as possible with its limited repertoire, a ten-track best-of set, Greatest Hits, appeared in July 2001. With no sign of the group reclaiming their spot atop the alt-metal heap (and such copycat acts as Godsmack, Days of the New, Puddle of Mudd, and Creed taking the Alice in Chains formula to the top of the charts), Cantrell completed his sophomore solo effort, Degradation Trip, in 2002. But just two months before the album's release, in April 2002, the news that every Alice in Chains fan had been fearing for years had finally come to pass: Layne Staley was found dead due to a lethal overdose of cocaine and heroin. (Former bassist Mike Starr also battled his own addictions through the years, and in fact appeared on the VH1 reality show Celebrity Rehab in 2010; Starr continued to fight chemical dependency until his death in March 2011 in Salt Lake City, Utah.) Although understandably grief-stricken, Cantrell launched his solo album's supporting tour according to schedule, opting to open shows in the summer for another Alice in Chains-influenced band, Nickelback. Alice in Chains spent the next few years in limbo, eventually reuniting in 2005 for a benefit show with Damageplan vocalist Pat Lachman filling in for the deceased Staley. After rotating through a handful of different singers, the group eventually settled on Comes with the Fall vocalist William DuVall, who appeared on the group's 2009 comeback record Black Gives Way to Blue.

Black Gives Way to Blue was a successful comeback, debuting at five on the Billboard 200 and going gold in the U.S. and Canada, while racking up two Grammy nominations. The group toured into 2010 and then in 2011 set to work on another album, titled The Devil Put Dinosaurs Here, which arrived in the summer of 2013. ~ Stephen Thomas Erlewine & Greg Prato, Rovi