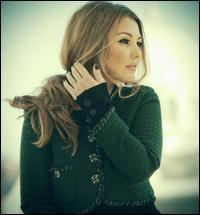 Spanish singer/songwriter Amaia Montero experienced ten years of chart-topping, award-winning success as the frontwoman of the internationally popular Spanish pop/rock band La Oreja de Van Gogh before embarking on a solo recording career, beginning with her chart-topping self-titled debut album in 2008. Born Amaia Montero Saldías on August 26, 1976, in Irún, Guipúzcoa, Spain, she joined the band Los Sin Nombre in 1996. Renaming themselves La Oreja de Van Gogh after the addition of Montero, the San Sebastián-based band was eventually offered a recording contract with Sony and proceeded to release a series of chart-topping albums: Dile al Sol (1998), El Viaje de Copperpot (2000), Lo Que Te Conté Mientras Te Hacías la Dormida (2003), and Guapa (2006). In 2007, after a decade of phenomenal success as the frontwoman of La Oreja de Van Gogh, Montero announced her departure from the band. The following year she released her full-length solo album debut, Amaia Montero (2008), on Sony BMG. Co-produced with the help of Claudio Guidetti, the self-produced, self-written, and self-titled album was an immediate success, topping the Spanish albums chart as well as the singles chart with "Quiero Ser." In 2011, Montero released the follow-up, simply titled 2. The album featured the single "Caminando". ~ Jason Birchmeier, Rovi