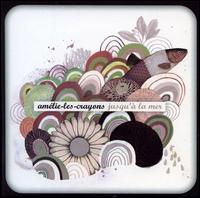 Amélie-les-Crayons is an award-winning French singer/songwriter and pianist especially well known for her whimsical stage show in which the lyrically fantastic characters and stories of her music come to life with scenery, costumes, and acting. Amélie, who took the latter part of her name, Les Crayons, from French actor/singer André Bourvil, began her performance career in Lyon, France, around the turn of the century. She made her recording debut in 2002 with Le Chant des Coquelicots, a self-produced six-track EP comprised of both home and live recordings. A couple years later she released her full-length album debut, Et Pourquoi les Crayons? (2004), on the independent label Neômme. In support of the album, she toured with a four-piece band comprised of herself (vocals, piano), Michel Caroline (accordion), Laurent Fellot (contrabass), and Heiko Wilhem (piano, clarinet, tuba). The two-hour stage show, which incorporated theatrical scenery, characters, costumes, and lighting, proved especially popular, and so the tour carried on from September 2004 all the way to August 2006, including nearly 200 concerts throughout France, Switzerland, Belgium, and Canada. The tour also included performances at the major festivals Printemps de Bourges and Alors Chante in Montauban. One of the performances from 2005 was filmed for release on DVD as Le Tour de la Question (2006). During a break from the road, Amélie spent eight months writing, composing, and recording her second full-length album, La Porte Plume (2007), with the input of 12 different musicians. La Porte Plume, which, like its predecessor, is filled with lyrically fantastic characters and stories, was awarded the Grand Prix de l'Académie Charles Cros for Best Chanson Album of 2007. Released again in association with the independent label Neômme, the album was Amélie's best-selling effort to date, peaking at number 53 on the French albums chart. ~ Jason Birchmeier, Rovi