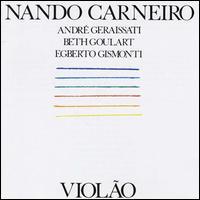 André Geraissati became a professional in the '70s when he backed Roberto Carlos, Ronnie Von, and Os Mutantes. From 1978 to 1988 he participated in Trio D'Alma, a trio of virtuosic, jazz-influenced violonistas (acoustic guitarists), with Rui Saleme and Ulisses Rocha. Geraissati also had an important role in some of Egberto Gismonti's records, having him in the same record released in the Brasil Musical/Música Viva series (1996). His solo career, begun in 1982 with Entre Duas Palavras, continued with Insight (1986), Solo (1987), Dagdad (1988), 7989 (1989), and Next (1999). ~ Alvaro Neder, Rovi