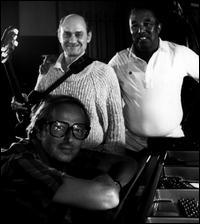 One of the most versatile musicians on the planet, André Previn has amassed considerable credentials as a jazz pianist, despite carving out separate lives first as a Hollywood arranger and composer, and then as a world-class classical conductor, pianist, and composer. Always fluid, melodic, and swinging, with elements of Bud Powell, Oscar Peterson, and Horace Silver mixed with a faultless technique, Previn didn't change much over the decades but could always be counted upon for polished, reliable performances at the drop of a hat.

He started piano lessons in his native Berlin before the Nazi threat forced his family to move to Paris in 1938 and the U.S. the following year. Settling in Los Angeles, the wunderkind Previn began working as a jazz pianist, an arranger for MGM, and a recording artist for Sunset Records while still in high school -- and by his 18th year, his first recordings for RCA Victor had racked up substantial sales. Originally swing-oriented, Previn discovered bop in 1950 just before his induction into the Army. Upon returning to Los Angeles, Previn went into overdrive, gigging as a jazz pianist, scoring films, and playing chamber music. Forming a smooth boppish trio with Shelly Manne and Leroy Vinnegar, Previn scored a huge crossover hit with an album of jazz interpretations of My Fair Lady, which in turn led to a series of likeminded albums of Broadway scores and kicked off an industry trend.

By 1962, Previn started to make the transition away from Hollywood toward becoming a full-time classical conductor, dropping his jazz activities entirely. He stayed away from jazz for 27 years, with the exceptions of a handful of sessions with Ella Fitzgerald and classical violinist/dabbler Itzhak Perlman. Indeed, in 1984, he was quoted as saying that jazz was "an expendable art form" for him. But in March 1989, shortly before resigning from the Los Angeles Philharmonic in a dispute with management, Previn returned to jazz with a trio album for Telarc with Ray Brown and Joe Pass, showing that he had not lost an iota of his abilities. Subsequently, he returned frequently to the studio as a jazz pianist for Telarc, Angel, Deutsche Grammophon, and DRG when not freelancing as a conductor or composing classical scores. ~ Richard S. Ginell, Rovi