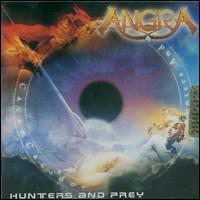 Angra was formed in 1991, picking up where Viper had left off playing neo-classical progressive metal. Singer Andre Matos left Viper after the Theatre of Fate album due to creative differences. Andre soon hooked up with guitarist Kiko Loureiro to form Angra; they were joined by bassist Luis Mariutti, guitarist Rafael Bittencourt, and drummer Marco Antunes. After a demo entitled Reaching Horizons, Antunes was replaced on drums by Ricardo Confessori. This completed the lineup for their first full-length album, Angels Cry, which met with critical and commercial success in Brazil and Europe. It was mostly a hard progressive metal set, slowing down only for a remake of Kate Bush's "Wuthering Heights." Two years later, in 1995, Angra recorded their second album, entitled Holy Land. While maintaining the same core sound as Angels Cry, Angra showed subtle Brazilian influences much more on Holy Land in the rhythms and backing vocals. Two EPs, Holy Live and Freedom Call, appeared between 1996 and 1997. The next album, Fireworks, released in 1998, is a more straight forward hard rock album. The classical influences from Angels Cry and the Brazilian influences from Holy Land are both gone, being replaced by straight forward metal. In 2001 longtime vocalist Andre Matos left the group and was replaced by Edu Falaschi. The resulting album, the prog/neo-classical metal Rebirth, was a return to form for the group. They followed that record's success with Temple of Shadows in 2005. ~ David White, Rovi