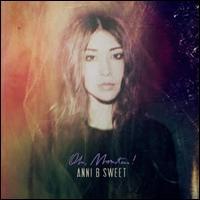 Anni B Sweet is the moniker of Ana López, born in Málaga in 1988. The Spanish indie folk-pop singer/songwriter chooses to sing in English, like her contemporary Russian Red. López first gained recognition in 2008 when she won the Mondo Sonoro magazine demo contest, and eventually signed with the independent Spanish label Subterfuge Records. Her first album, Start, Restart, Undo, was released in 2009 to very positive reviews, and drew comparisons to Cat Power, Norah Jones, and Regina Spektor. The album's special edition included a laid-back cover of a-ha's "Take on Me" that was featured in a McDonalds commercial in Spain. After spending most of 2011 touring and doing promotional appearances in places as far apart as France, Mexico, and Japan, the singer released her sophomore effort, Oh Monsters!, in May 2012. ~ Mariano Prunes, Rovi