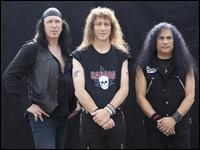 Toronto, Canada's Anvil were one of the first North American bands to push the sound and style of the New Wave of British Heavy Metal one step further. Clearly indebted to the likes of Judas Priest, Iron Maiden, and many others from across the Atlantic, Anvil nonetheless played louder, faster, and heavier than their heroes, in the process laying the groundwork for the thrash movement that took over heavy metal's underground in the '80s. Yet unlike many of the furious West Coast thrashers that immediately followed them, Anvil were mostly out for a good time: their albums often featured borderline pornographic sex songs, and frontman Steve "Lips" Kudlow frequently took to the stage in a bondage harness and played guitar solos with a vibrator.

Zany antics notwithstanding, Anvil's musical contributions were very real; their fastest songs were some of the earliest speed metal laid to wax, while jazz-trained drummer Robb Reiner set new technical standards for the genre, including pioneering the double bass drum technique that's become a staple of much extreme metal since. Anvil's second and third albums, Metal on Metal and Forged in Fire, made significant waves in the metal community over 1982-1983, but despite the respect of musicians and metalheads alike, stardom was not to be theirs. Geographic isolation, label and management difficulties, and shifting musical trends all conspired against them, leaving them largely the province of cultists and collectors just a few short years later. Undaunted, Anvil soldiered on, continuing to record and tour whenever possible, and in 2009, a documentary film by the band's former teenage roadie threatened to break them to the wider audience they never found in their prime.

Anvil were formed in Toronto in 1978 by childhood friends Steve "Lips" Kudlow (vocals/guitar) and Robb Reiner (drums). Both came from Jewish families, and had been playing music together since their teens. Initially known as Lips, the band added bassist Ian Dickson and rhythm guitarist Dave Allison, and in 1980 recorded an independent album titled Hard 'n' Heavy, which introduced their penchant for sexual explicitness. Upon signing to the Canadian independent label Attic Records, the band changed its name to Anvil, and reissued Hard 'n' Heavy with an updated cover in 1981. Their groundbreaking second album, Metal on Metal, adopted a much faster, heavier style, and took the metal underground by storm. Anvil snagged opening slots on tours with the likes of Iron Maiden and Motörhead, among others, and played significant festival dates in Japan and England. The 1983 follow-up Forged in Fire refined Anvil's signature sound while adding more musical variety, and furthered their growing following.

However, Anvil's success stopped right there. Seeking a better stateside deal, the band's manager got them released from Attic, but a new contract never materialized. While the band hung in limbo, heavy metal exploded -- a wave of hook-heavy pop-metal bands conquered the mainstream, while avowed Anvil fans like Metallica, Slayer, and Anthrax (the latter of which started out playing Anvil covers) catapulted the genre into new realms of heaviness, far beyond anything Anvil had ever recorded. Attic issued a collection of hits and outtakes called Backwaxed in 1985, but the official follow-up to Forged in Fire, Strength of Steel, wasn't released until four years later in 1987, when the band licensed it to Metal Blade. Creatively disappointing, Strength of Steel effectively killed what little momentum Anvil had remaining. They recovered somewhat on 1988's heavier Pound for Pound, which featured trademark sex songs like "Safe Sex" and "Toe Jam," as well as the hockey anthem "Blood on the Ice," but it was too late. Dave Allison left the band in 1989, and was replaced by Sebastian Marino, but not before the release of that year's Past & Present: Live in Concert.

Marino's only album with Anvil was 1991's Worth the Weight, a darker, thrashier outing than anything they'd previously done. It too failed to catch on, and was followed by a lengthy recording drought. Ian Dickson called it quits in 1993, being replaced by Mike Duncan; Marino left to join Overkill in 1995 and was replaced by Ivan Hurd, while Duncan departed a year later in favor of new bassist Glenn Five (b. Glenn Gyorffy). Thus reconstituted, Anvil signed with Canadian indie Hypnotic Records and issued the comeback album Plugged in Permanent in 1996, which continued the heavy, serious direction of its predecessor. Released in 1997, Absolutely No Alternative returned to the band's tradition of sex songs with offerings like "Show Me Your Tits" and "Hair Pie." Speed of Sound appeared in 1999 and found Reiner experimenting with the blastbeat technique for which he'd helped lay the groundwork. However, the band went with a somewhat lighter, more classic metal style for its next several albums, 2001's Plenty of Power (which featured a tribute to "Pro Wrestling"), 2002's Still Going Strong, and 2004's Back to Basics.

In 2005, Anvil were contacted by a former roadie, Sacha Gervasi, whom they'd met as a teenager while touring England. Gervasi had grown up to become a screenwriter, most notably penning the Steven Spielberg-directed The Terminal, and wanted to film a documentary about his old friends. The result, Anvil! The Story of Anvil, chronicled Anvil's efforts to tour Europe and to record their 13th album, aptly titled This Is Thirteen, which reunited them with their early-'80s producer Chris Tsangarides. Without a label, Anvil opted to maximize profits by selling the album through their own website. Following Hurd's exit from the band, the film became a hit on the festival circuit in 2008, and was released in the U.K. in February 2009. Within two months, it became the highest-grossing rock documentary in U.K. history, and was quickly snapped up by VH1 for American distribution. Anvil! The Story of Anvil was released in the U.S. to glowing reviews in April 2009, and the band supported it with live gigs at a series of screenings around the country and a collection of brand-new songs called This Is Thirteen. In 2010 a remastered re-release of 1989's Past & Present arrived on Roadrunner, followed in 2011 by Juggernaut of Justice. After nearly 35 years of rockin', the band's fiftheenth album, Hope in Hell, arrived in 2013. ~ Steve Huey, Rovi