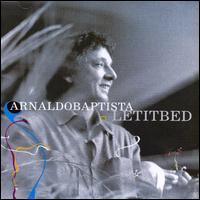 Arnaldo Baptista is a key figure in Brazilian rock. A classically trained pianist, he is considered to be the link between the tropicalista rock of the 1960s and '70s and the Brazilian rock reborn in the '80s. His seminal group, Os Mutantes, is a piece of history in Brazil that has transcended the music to expand its range of influence through the habits and identity of several generations. The son of Clarisse Leite Dias Baptista, a pianist and concert artist herself and the first woman in the world to write a concert for piano and orchestra, Baptista wrote his first piano piece on sheet music at age seven. Later, together with his brothers Sérgio Dias Baptista and Cláudio César Dias Baptista and some friends, they took the path of rock & roll.

Arnaldo Baptista began to play bass in the group the Wooden Faces, a name that changed several times from O'seis to O Konjunto, and at last in 1966, it went through its last mutation to Os Mutantes (The Mutants). It was under this name that they became the most important rock band in Brazil. The initial formation was a trio, with Baptista (bass/voice), Rita Lee (voice/percussion/visual conception), and Sérgio Dias (guitar/voice). His brother, Cláudio César, took charge of the sound engineering. After their third album, Baptista took over on keyboards and Arnolpho Lima "Liminha" Filho (who is now a successful producer very requested in the studios) took the bass. Ronaldo "Dinho" Leme, already an occasionally hired addition, took charge of the drums. The group remained with this formation until mid-1973, when Lee left the group. In the next year, Baptista did the same, to record his solo album Lóki? (1974); it is considered a masterpiece and the decade's milestone.

In 1977, Baptista began a new period. With a recently formed band, Space Patrol, renamed for Patrulha do Espaço, he kept his performances only in the city of São Paulo. His fans from outside the city could only get to know this underground phase a decade later, when the albums Faremos uma Noitada Excelente... (live, 1987) and Elo Perdido (1988) were released.

The decade of the 1980s brought new changes. Baptista became hospitalized for psychiatric disorders and threw himself off the third floor of the Hospital dos Servidores Públicos. Surviving with consequences, he spent a painful four-month recovery period at the hell's station of that hospital. He was later permitted to leave the hospital and spend longer periods at home, until he refused to return. Aided by his future wife, Maria Lúcia Barbosa, and radio host Sônia Abreu, Baptista re-emerged into public life and music. He began a series of solo shows, entitled Singin' Alone, in which he presented himself playing piano and violão. The shows yielded an LP under the same title, released in 1982 by the Baratos Afins label.

From 1982 to 1984, Baptista retired from the stage due to an accident. During this period, he traveled through the worlds of literature and visual arts, along with music. In 1995, Virgin Brasil issued Cyborg Valvulado, signing a contract with Baptista for the reissue of Singin' Alone and future releases. During the 2000s, Baptista recorded one solo album, Let It Bed, then reunited Os Mutantes with brother Sérgio Dias and Dinho Leme. A live recording was released in 2006, and the triumphant studio return Haih...Ou Amortecedor... followed in 2009. Another Mutantes album, Fool Metal Jack, appeared in 2013. ~ Alvaro Neder, Rovi