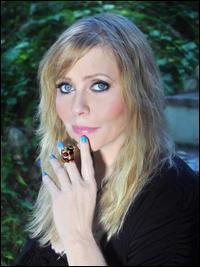 It's not the smattering of records that former model/groupie Bebe Buell has issued that she's best known for, but rather her stormy affairs with a variety of rockers, as well as being the mother of actress Liv Tyler. Born on July 14, 1953, and raised in Virginia, Buell was smitten by rock & roll at an early age, first by Elvis Presley, before the Beatles and the Rolling Stones invaded the U.S.. Buell's mother encouraged her daughter to pursue a career in modeling, and when she was 18 years old, she relocated to New York City and began a career as a Ford model. Shortly thereafter, Buell began a relationship with Todd Rundgren, who had just begun one of the most commercially successful periods of his career. It was through Rundgren that Buell met rock photographer Lynn Goldsmith, who convinced the model to take some test photos for Playboy magazine. The plan worked, as Buell became a Playboy Playmate in 1974. Besides Rundgren, Buell subsequently dated some of rock's biggest names -- Led Zeppelin's Jimmy Page, Iggy Pop, Rod Stewart, the Dead Boys' Stiv Bators, and Elvis Costello. Buell also had a whirlwind romance with Aerosmith's Steven Tyler during 1976 -- which ended when Buell was alarmed by Tyler's drug abuse. But the brief fling resulted in Buell giving birth to daughter Liv in 1977. Despite Rundgren knowing that he wasn't the father, the pair reconciled and Rundgren supported the baby (it later became known that Liv thought Rundgren was her father until the '80s, when a by-then clean and sober Tyler re-entered the picture). But Rundgren and Buell's relationship eventually ended for good, which Rundgren documented in his 1978 hit single, "Can We Still Be Friends?" Having been around the rock & roll scene for a long time by then, it was only natural that Buell would eventually put together her own band, as 1980 saw the formation of the B-Sides. The group issued an EP in 1981, Cover Girl, which featured contributions by the likes of Rick Derringer and the Cars' Ben Orr and Ric Ocasek (the latter two of whom guested on readings of Iggy Pop's "Funtime" and the obscurity "Little Black Egg," both of which would turn up years later with Orr's vocals replacing Buell's on 1995's Just What I Needed: The Cars Anthology). By 1985, Buell was fronting a new band, called the Gargoyles, which only resulted in an obscure self-titled single several years later. Buell was interviewed extensively for the superb book, Please Kill Me: The Uncensored Oral History of Punk (by Legs McNeil and Gillian McCain), as well as for Aerosmith's tell-all bio, Walk This Way. Buell decided to pen her own tell-all bio shortly thereafter, resulting in the release of Rebel Heart: An American Rock N' Roll Journey in 2002. Buell has also issued solo albums on a sporadic basis, including such titles as 2004's Retrosexual (which included covers of Johnny Thunders' "Little Bit o' Whore" and Motörhead's "I'll Be Your Sister," along with originals) and the four-song EP Free to Rock, 2010's Sugar, and 2011's Hard Love. ~ Greg Prato, Rovi