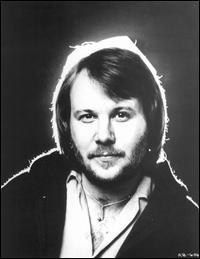 Producer/songwriter/keyboardist Benny Andersson co-produced the mega-hits of '70s Swedish pop group ABBA along with fellow ABBA member Björn Ulvaeus. Listening to ABBA, one can hear a definite Phil Spector/Brian Wilson and the Beach Boys influence (the dense vocal harmonies) on their records, understandable since Andersson cites the group as a favorite.

Benny Andersson was born on December 16, 1946, in Stockholm and comes from an accordion-playing family, which spawned his interest in picking up the instrument as a child. After discovering Elvis Presley, he began playing in rock bands. Choosing not to follow his father into the construction business, Andersson quit his custodial job to play piano with the Hep Stars. The group had 15 chart records in Sweden, including Andersson's song "Sunny Girl." After being exposed to the recording studio, Andersson's interest was piqued.

Later he met songwriter/guitarist/producer Björn Ulvaeus and they began collaborating. The duo decided to use their girlfriends, Anni-Frid Lyngstad and Agnetha Faltskog, on "People Need Love," which became a hit single. They decided to become the group Bjorn, Benny, Anna and Frida in 1974. The quartet performed their "Waterloo" at the televised Eurovision Song Contest and won first prize. Because of the huge exposure, "Waterloo," an Atlantic Records single, became an international hit, going to number six on Billboard's pop charts in summer 1974.

ABBA's other charting singles were "S.O.S.," "I Do, I Do, I Do, I Do, I Do," "Mamma Mia," "Fernando" (number one adult contemporary), the shimmering million-selling "Dancing Queen" (number one pop), "Knowing Me Knowing You," "Money,Money,Money," "The Name of the Game," the gold "Take a Chance on Me" (number three pop), and "Does Your Mother Know"; the group's last big hit was "The Winner Takes It All" (number eight pop, number one adult contemporary). Their biggest albums were the gold LP Arrival (early 1977), the platinum LP The Album ("Take a Chance on Me") from 1978, the gold Voulez-Vous (summer 1979), the gold Super Trouper (late 1980), and The Visitors (early 1982).