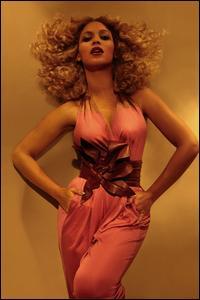 One of the most recognizable characters in modern-day R&B, Beyoncé first rose to fame as the siren-voiced centerpiece of Destiny's Child before embarking on a multi-platinum solo career in 2001. Booming record sales, Grammy awards, movie roles, and marriage to rapper/CEO Jay-Z combined to heighten her profile in the 2000s, making the singer a virtual mainstay in the entertainment world. While some media outlets derisively championed Paris Hilton as "the next Marilyn Monroe," Beyoncé was a much better contender for the role, her glittering pop culture persona only matched by her success onscreen and on record.

Born in Houston in September 1981, Beyoncé Giselle Knowles began performing at age seven, winning upwards of 30 local competitions for her dancing and vocal abilities. She also joined her cousin Kelly Rowland and classmates LaTavia Roberson and LeToya Luckett in forming an adolescent vocal group. Mathew Knowles, Beyoncé's father and Rowland's legal guardian, signed on to be the girls' manager, eventually quitting his full-time job to focus on their efforts. This situation would ultimately lead to the creation of one of the most popular female R&B groups of all time -- Destiny's Child.

Destiny's Child gained momentum throughout the '90s, appearing on Star Search in 1992 (under the name Girl's Tyme) and weathering several lineup changes before signing to Columbia Records in 1997. Four studio albums later, the group had officially become the best-selling female group of all time, with such smash hits as "Jumpin' Jumpin'," "Bills, Bills, Bills," "Say My Name," and "Survivor" bolstering the girls' momentum despite a continued string of lawsuits from former members Roberson and Luckett (who contested Mathew Knowles' management, claiming he withheld profits and unjustly favored his daughter and niece). In 2001, Beyoncé, Rowland and replacement member Michelle Williams allowed themselves a break from the group to pursue individual solo careers. Before landing several movie roles, Beyoncé became the first African-American female artist and second woman ever to win the annual ASCAP Pop Songwriter of the Year Award. An appearance in the MTV drama Carmen: A Hip Hopera quickly followed, but it was her role as Foxxy Cleopatra in 2002's Austin Powers in Goldmember that established her as a true Hollywood star.

The following year proved to be another busy one as Beyoncé landed the role of Etta James in Cadillac Records, a musical biopic that explored the heyday of Chicago's Chess Records. Shooting commenced in February 2008, with Beyoncé also serving as co-executive producer. One month before the film's December release, the singer released her third studio album, I Am...Sasha Fierce. The double-disc effort emphasized her two distinct personalities, allowing Beyoncé to explore both mainstream sounds and traditional R&B. Some live releases followed. Released in 2009, I Am...Yours, a CD/DVD set, documented an August 2009 performance at Wynn Las Vegas, while 2010's I Am...World Tour, available in separate audio and video formats, was recorded at London's significantly larger O2 Arena (a few months after the Vegas program). She followed ten Grammy nominations with 2011's 4, which debuted at the top of the Billboard 200. One of her most energetic and empowering tracks, "Run the World (Girls)," was issued as the lead single, while "Love on Top" eventually won a Grammy for Best Traditional R&B Performance.

Giving birth to Blue Ivy Carter in January 2012 didn't slow her down. Within a few months, she was performing in Atlantic City, and she later appeared at President Barack Obama's second inauguration. Joined by Michelle Williams and Kelly Rowland, she headlined the Super Bowl XLVII halftime show. Life Is But a Dream, a documentary, first aired on HBO in February 2013, and was followed by appearances on albums by Rowland, the-Dream, and Jay-Z. New material, such as "Bow Down" and "Standing on the Sun," trickled out without proper release. Then, on December 13 -- with no preceding announcement -- Beyoncé released a self-titled album, with accompanying videos, via iTunes. Her husband and daughter, along with Drake, Frank Ocean, and writer Chimamanda Ngozi Adichie (via a sampled TED talk), made guest appearances. Knowles, assisted by the likes of Hit-Boy, Pharrell, Timbaland, Justin Timberlake, and Miguel, co-wrote and co-produced the majority of the album's material. ~ Andrew Leahey, Rovi