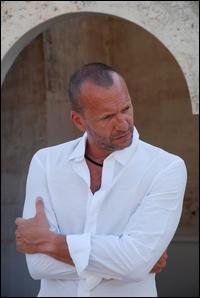 Romantic balladeer Biagio Antonacci emerged in the early '90s to become one of the most successful Italian pop singers of the decade. Born in Milan on November 9, 1963, Antonacci was raised in Rozzano. While studying geometry, in 1988 he entered the annual Festival di Sanremo with his song "Voglio Vivere in un Attimo," scoring a recording contract immediately thereafter. His debut LP, Sono Cose Che Capitano, appeared a year later, but attracted little attention at radio or retail. However, its 1991 follow-up, Adagio Biagio, sold in excess of 150,000, launching Antonacci to national fame. He returned to Festival di Sanremo in 1993 to perform "Non So Più a Chi Credere" in support of his third album, Liberatemi. Subsequent efforts including 1996's Il Mucchio and 1998's Mi Fai Stare Bene solidified Antonacci's superstar status, culminating in the release of his first live effort, 9 Novembre 2001. After spending the next several years on tour, including treks to Spain and South America, the singer resurfaced in 2004 with Conviviendo, Pt. 1, issuing its sequel a year later. ~ Jason Ankeny, Rovi