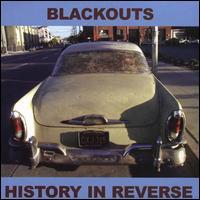 Ministry's transformation from a synthesizer-driven dance act to a bone-smashing industrial thud machine was in part shaped by an obscure band from Seattle. Bassist Paul Barker and drummer Bill Rieflin were members of the post-punk group the Blackouts, experimenting with oppressive, detached rhythms. If it weren't for their affiliation with Ministry, the Blackouts probably would've faded from rock history, but they do represent a curious and often-overlooked part of pre-grunge Seattle. The Blackouts picked up where the Telepaths left off. In 1975, Erich Werner (vocals, guitar) and Rieflin formed the Telepaths in Seattle with singer Dan Rabinowitz, guitarist Reid Vance, bassist Geoff Cade, and drummer Dean Helgeson. The Telepaths split up in 1978, and Rieflin and Werner started the Blackouts a year later with Roland Barker (saxophone, keyboards) keeping the Telepaths' adventurous, uncompromising spirit alive. The Blackouts later moved to Boston and Paul Barker (Roland's brother) joined the band. The Blackouts recorded a 7" and a 12" for small independent labels before they were introduced to Ministry's Al Jourgensen in 1981. Jourgensen produced the Blackouts' Lost Souls Club EP in 1983, his first work with future Ministry members Paul Barker and Rieflin. The Blackouts disbanded in 1985; by 1987, Barker and Rieflin were in Ministry, as the group embraced a harder, more aggressive sound. Ministry's 1988 industrial landmark The Land of Rape and Honey was co-produced by Barker, credited as Hermes Pan. The LP launched Ministry's eardrum-shattering assault of chain saw riffs and apocalyptic percussion. Rieflin, on the other hand, participated in the projects of other artists like Nine Inch Nails, Hector Zazou, and Adrian Sherwood. Rieflin recorded and toured with both Ministry and the Revolting Cocks until he severed ties with Jourgensen after the completion of Ministry's 1995 album Filth Pig. In 1999, Rieflin released his solo debut, Birth of a Giant. ~ Michael Sutton, Rovi