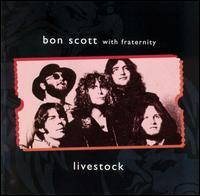 Best remembered as the original frontman of the legendary hard rock band AC/DC, singer Bon Scott was born Ronald Belford Scott in Kirriemuir, Scotland on July 9, 1946. As a child he began performing in his father's pipe band, and following the family's relocation to Australia in 1952 he quit school at age 15, later playing in a local rock outfit called the Spektors. By 1967, Scott had joined the Melbourne-based group the Valentines, making his recorded debut with the single "Everyday I Have to Cry"; the band soon emerged as one of the most popular on the Aussie circuit, in mid-1969 issuing an EP, My Old Man's a Groovy Old Man. A drug bust destroyed the Valentines' public image, however, and after cracking the national Top 30 with their 1970 single "Juliette," the band dissolved; Scott soon joined the Sydney blues-rock unit Fraternity, issuing the LP Livestock in 1971. Flaming Galah followed a year later; in 1973, however, Scott was involved in a motorcycle accident which left him comatose for several months, during which time Fraternity disbanded. After recovering, he worked a series of odd jobs before recording a demo as a member of the short-lived Mount Lofty Rangers; finally, in 1974, Scott joined AC/DC, recording the group's debut LP High Voltage a year later. AC/DC's ascent to international stardom culminated in 1979 when their LP Highway to Hell reached the U.S. Top 20; however, on February 19, 1980 Scott died in the wake of an all-night drinking binge, with the surviving members of the band tapping new vocalist Brian Johnson to record the classic Back in Black just a few months later. The 1997 AC/DC box set, Bonfire, celebrated Scott's contributions to their legacy. ~ Jason Ankeny, Rovi