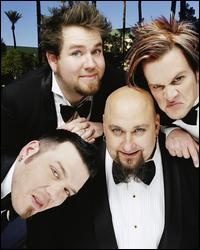 Cheeky punk-pop outfit Bowling for Soup were formed in 1994 in Wichita Falls, Texas, featuring lead vocalist/guitarist Jaret Reddick, guitarist/vocalist Chris Burney, bassist Erik Chandler, and drummer Gary Wiseman. However, they didn't rise beyond local prominence until 1997, when a heavy touring schedule helped broaden their fan base and landed them opening spots for nationally prominent punk and ska bands. The following year, Bowling for Soup recorded a debut EP for the local FFROE label, titled Tell Me When to Whoa!; by this point, their base of operations had been moved to Denton, Texas, the site of the label's headquarters as well. Later in 1998, Bowling for Soup issued their first full-length album, Rock on Honorable Ones!!! Both it and its predecessor proved to be popular around the state (Honorable Ones sold over 10,000 copies alone) and the band ended up scoring a deal with Jive/Silvertone.

For their 2000 major-label debut, Let's Do It for Johnny!, Bowling for Soup re-recorded some of the best songs from their indie records and added a few new tracks, including lead single "The Bitch Song" and a cover of Bryan Adams' "Summer of '69." Two years later, the band released Drunk Enough to Dance, and nabbed a Grammy nomination for the single "Girl All the Bad Guys Want." Hangover You Don't Deserve followed in 2004, and BFS landed another hit single with "1985," which helped propel Hangover to number 37 on the Billboard 200. Bowling for Soup returned in 2005 with Goes to the Movies, on which they tackled various television and movie theme songs. The Great Burrito Extortion Case followed in the fall of 2006, spearheaded by the bouncy single "High School Never Ends," while Sorry for Partyin' -- the band's seventh studio effort -- arrived in late 2009. After rounding out the year with a holiday album, Merry Flippin' Christmas, Vol. 1, Bowling for Soup launched an acoustic tour in 2010 and began recording the band's 11th studio album later that summer. The resulting Fishin' for Woos was finished in three weeks and released in 2011; they also released a second holiday album, Merry Flippin' Christmas, Vol. 2, that year. In 2013 the band announced that, due to the toll the rigors of touring took on their personal lives, Bowling for Soup would no longer be touring in the U.K. after that year, which would find them returning to Europe one last time after the release of their twelfth album, Lunch. Drunk. Love. ~ Steve Huey, Rovi