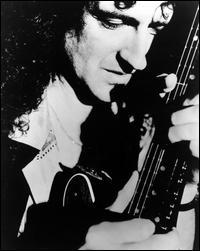 Few rock guitarists possess a playing style as instantly recognizable as Queen's Brian May. With his orchestrated guitar armies (multi-tracked guitar lines overdubbed on top of each other) and instantly memorable, well-constructed melodic leads, May is in a class all by himself. Born in Hampton, Middlesex, in July 1947, May showed an interest in music at a very early age -- learning to play the ukulele and piano before receiving his first guitar as a present on his seventh birthday. Shortly thereafter, May and his father began to build a custom guitar from scratch. Completed two years later, the one-of-a-kind instrument would become known as the Red Special, a guitar that would later become May's sonic and visual trademark throughout his career.

It wasn't long until May began to pick up a thing or two from such popular rock guitarists as the Shadows' Hank Marvin, Elvis Presley's sideman Scotty Moore, and Buddy Holly. As a student at secondary school, May formed his first group, the instrumental band 1984, playing around London and even opening a 1967 show at the Olympia Theatre for such soon-to-be big names as Jimi Hendrix, Traffic, Pink Floyd, and Tyrannosaurus Rex (later T. Rex). After beginning studies at Imperial College (in the physics/infrared astronomy field) and growing weary of their musical direction, May left 1984 in the spring of 1968.

During his college career, May hooked up with drummer Roger Taylor (via an ad placed on a college noteboard) and a fellow ex-1984 member, bassist/vocalist Tim Staffell, forming the rock trio Smile. Shortly after graduating from college with an honors degree in physics and math, May focused full-time on music when Smile signed to Mercury Records. Despite great promise, Smile only managed to issue one single (titled "Earth") and a few unreleased tracks before Staffell left the group. But it was a friend of Staffell's who would offer his services as the group's new singer -- Freddie Mercury. With the line-up change came a new name, Queen, and a new musical direction -- heavy rock mixed with grand ballads and a flamboyantly glam look.

After going through numerous bassists, Queen found a permanent member in John Deacon -- resulting in a recording contract with EMI/Elektra and a self-titled debut following in 1973. With each successive release (1974's Queen II and Sheer Heart Attack), Queen's musical direction and stage show grew stronger and more popular, until they were one of the world's biggest acts by the mid- to late '70s, due to such mega-hit albums as Night at the Opera, A Day at the Races, News of the World, and Jazz. Unlike other groups where a single member supplied all the songwriting, all four of Queen's members had their own songwriting credits equally, with May writing some of the group's most identifiable hits -- "We Will Rock You," "Fat Bottomed Girls," "Now I'm Here," and "Tie Your Mother Down," among others.

During a short break in 1983, May issued his first solo release, the four-track EP Star Fleet Project (which featured an all-star cast backing him -- Eddie Van Halen, REO Speedwagon drummer Alan Gratzer, and session bassist Phil Chen), and co-produced the debut recording from the obscure heavy metal outfit Heavy Pettin, titled Lettin Loose. Around the same time, an exact duplicate of May's Red Special guitar was issued to the public via the Guild guitar company, and May recorded a video guitar lesson as part of the Star Licks series.

Queen would continue issuing hit albums and sold-out tours throughout the late '80s (as they experimented with a wide range of musical styles), until they became solely a "studio band" during their latter years, 1989's The Miracle and 1991's Innuendo (the reason for this was kept under wraps at the time, but it later became known that it was due to health reasons -- Mercury was diagnosed with AIDS). With Mercury's death in 1991, Queen went their separate ways, with May focusing on a solo career and other projects (including hosting and playing at a 1991 Guitar Legends concert alongside Steve Vai and Joe Satriani).

May's first full-length solo album was preceded by the single "Driven by You," which reached the Top Ten in England and was featured in a Ford car commercial -- winning an Ivor Novello Award for Best Theme from a TV/Radio Commercial. 1993 finally saw the release of Back to the Light, an album that was a sizeable hit in Europe, and led to May's first solo tour (which included members Cozy Powell on drums, Neil Murray on bass, longtime Queen sideman Spike Edney on keyboards, Jamie Moses on guitar, plus backing vocalists Shelley Preston and Cathy Porter). A year later, a live document of the tour, Live at the Brixton Academy, was issued, mixing new solo material with Queen classics. It wasn't until 1998 that May would issue a proper studio follow-up, Another World.

In addition to rock music, May has retained his interest in astronomy, and in 2006 he returned to his studies in astrophysics, completing his doctoral thesis and earning his PhD from Imperial College London in 2007. May also has a keen interest in 3-D photography, and wrote a A Village Lost and Found, a study of T.R. Williams, a famous stereo photographer of the 1850s, as well as a book on French Diableries.

May has also tried his hand at penning original music for movies (the 1996 version of The Adventures of Pinnochio) and a radio series (a BBC radio special on the Amazing Spiderman), as well as recording the soundtrack for the Red and Gold Theatre Company's production of Macbeth, which was staged at London's Riverside Theatre in the late '90s.

May's contribution to rock guitar remains great as his playing has proven to be a huge influence on other renowned rock guitarists past and present, including Billy Corgan (Smashing Pumpkins), Ty Tabor (King's X), Nuno Bettencourt (Extreme), and Phil Collen (Def Leppard), to name but a few. ~ Greg Prato, Rovi