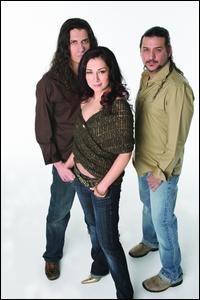 Latin pop threesome Camela formed in Madrid's San Cristóbal de los Angeles neighborhood. The group made their debut with an independent record called Lágrimas de Amor in 1994, followed by Corazón Indomable. After becoming popular throughout Spain with their techno-rhumba style, Camela had the opportunity to sign up with major label EMI, releasing Simplemente Amor, produced by Jesús Gómez, which included the hit single "¿Por Qué Me Estas Engañando?," followed by 2001's amor.com and a string of further albums in the next ten years -- they were still going strong with 2011's La Magia del Amor -- in addition to a plethora of compilations. While highbrow critics sneered, the population of Spain voted with their wallets, eventually buying over seven million of the group's records; their fifth album Sólo por Ti went double platinum in just a week. The secret of their success lay in creating a unique sound at once international and unmistakably Spanish, Europop synths and drum machines colliding head-on with flamenco guitars and vocal styles; their rigid adherence to this template (although their later albums did see them cautiously incorporating other genres); their prolificacy -- a new studio album almost every year; and their from-the-heart simplicity, basic melodies and everyman stories of love and heartbreak. ~ Drago Bonacich & John D. Buchanan, Rovi